Government intervention is never the panacea some on the left want to believe. 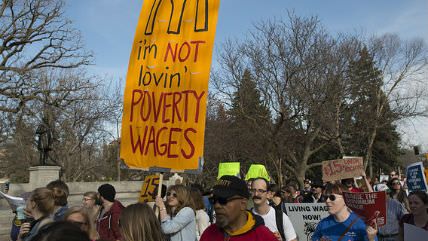 The Daily Beast today brings us a rather comical example of a liberal writer publicly discovering that raising the minimum wage can have negative repercussions for the poor. Writes Monica Potts:

This week, the Los Angeles City Council voted to increase its minimum wage to $15 an hour, from the current $9, by 2020…But there's another potential problem. The finances of those at the bottom are delicately balanced and intertwined with so many safety net programs, like food stamps and rental assistance, that the question of whether workers are better off must be weighed against whether and how they lose the support they receive from those programs. And the truth is it's not clear how much better off people who make the minimum wage will be.

It's encouraging to see the author realize that even the most well-intentioned government interventions can sometimes have disastrous consequences for the people they're trying to help.

Reason's coverage of this issue over the years has been deep and wide. Minimum wage increases force business owners to cut back on hiring, making it harder for low-skilled workers to find jobs at all. (Potts' evidence-free assertion that "most economic research" doesn't bear that out gets a good pre-buttal from Ron Bailey here.) People in poverty, who may already be struggling to afford food and clothes and diapers, are also least able to absorb it when goods and services become more expensive—a natural consequence of forcing employers to pay workers a lot more for the same labor.

Potts' main fear, though, is that if workers start making more money, they might no longer qualify for public assistance programs. And she's right: A person whose wage suddenly jumps 66 percent to $15 an hour (and who is lucky enough to keep her job at all) could very well lose access to means-tested benefits like food stamps and childcare subsidies, which together provide her with more value than the additional after-tax pay she's now receiving.

Here's the thing: A worker who would be worse off making $15 an hour due to a minimum wage hike would also be worse off making $15 an hour because she went back to school to learn new skills. This is exactly what people on the right mean when we talk about welfare creating a poverty trap—that too-generous government programs can change the calculus for a person at the low end of the income ladder so that it no longer makes financial sense to try to increase your value as a worker, because if you earn too much, you'll lose your benefits. It's not worth the risk.

Potts' article is also an excellent example of what I was talking about in my appearance on HuffPost Live earlier this week, when I said that replacing our 80+ disparate federal welfare programs with a "universal basic income" might sound good in theory—but I'm skeptical the existing programs would ever actually go away. That's because as soon as you try to eliminate a program, some people will get up in arms on behalf of those who currently benefit from it. "You can't actually mean you want to get rid of Medicaid?!" they might cry, where "Medicaid" could be replaced by "housing assistance" or "Pell grants" or any other federal sacred cow.

In fact, I would like to get rid of those programs. They are an inefficient, convoluted, fraud-ridden mess, and when it comes to helping the poor, as a society we ought to be able to do better.

I'd also like to get rid of the minimum wage. If a person wants to hire someone at $4 an hour to do a low-skilled task and a worker is willing to accept the job at that rate, that's a win-win and the government has no business stepping in to forcibly prevent it. The fact is that not everyone has the experience and qualifications to be worth hiring at $15 an hour. We shouldn't criminalize offering someone the chance work for less.