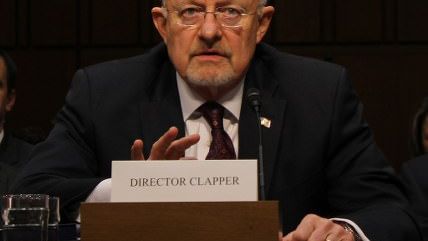 After Edward Snowden revealed the National Security Agency (NSA) had been collecting and storing telephone metadata from pretty much all Americans, supporters within the administration and security state-loving legislators insisted that this program was absolutely vital to protecting us all from terrorists. It was absolutely important. Abandoning the program would put us all in danger, privacy rights be damned.

But apparently it's also not so important a program that Director of National Intelligence James Clapper would remember it exists when he's directly asked about it. This is the latest spin to explain why Clapper falsely told the Senate Intelligence Committee back in 2013 that the NSA did not "wittingly" scoop up data on millions of Americans. From The Hill:

"This was not an untruth or a falsehood. This was just a mistake on his part," Robert Litt, the general counsel for the Office of the Director of National Intelligence, said during a panel discussion hosted by the Advisory Committee on Transparency on Friday.

"We all make mistakes."

Mind you, this has already been spun once before. Previously Clapper acknowledged he wasn't truthful but gave the "lest untruthful" answer he was allowed to give, because secrecy and all that.

Litt insists that Clapper was thinking about a completely different program authorized by the Foreign Intelligence Surveillance Act. He totally forgot about this one.

Watch the video of Clapper's testimony below and decide for yourself if you believe him: