Katherine Mangu-Ward | From the June 2015 issue 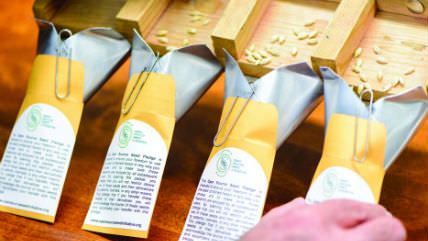 The Open Source Seed Initiative wants to make carrot seeds more like software. That may seem like an odd project, but consider this: It's currently possible to patent plants with certain traits, whether they are created through traditional breeding or biotech modification. Worried that the trend of increasingly vague, aggressively enforced patents was discouraging innovation, a group of scientists at the University of Wisconsin–Madison got together in 2012 with the goal of producing and distributing seeds outside of the conventional intellectual property framework—much in the same way that the open source Linux operating system exists in parallel with Microsoft Windows and iOS, or the anyone-can-edit resource Wikipedia competes with Encyclopaedia Britannica.

While the legal analogy isn't perfect—patents in plant breeding operate quite differently than intellectual property in the world of computer code—the group has hit on a novel solution to encourage the kind of intellectual cross-pollination that continues to invigorate the digital world.

A short pledge is printed on each packet of broccoli, kale, or quinoa seeds. Tearing open the envelope signals that users agree to keep the seeds—and anything derived from them—in the public domain, creating a growing pool of genetic material for researchers and farmer-breeders to borrow from without fear of patent repercussions.