Chicago cop found not guilty of involuntary manslaughter because judge said off-duty shooting was reckless and he should've faced a murder charge. 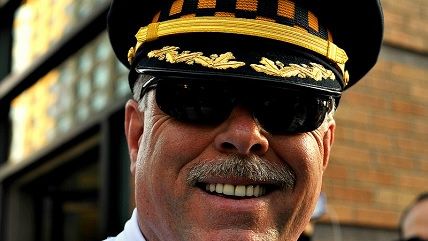 Last week, an off-duty Chicago police officer was found not guilty of involuntary manslaughter  after shooting a gun over his shoulder at a group of people while he was driving the wrong way down a one way street. The cop, Dante Servin, said he felt threatened for his life by one of the men in the group.  He ended up killing a 22-year-old woman. The judge handed the not guilty decision down from the bench, dismissing the charge because, the judge said, the prosecutor should've charged the cop with murder instead.

Now Servin, on desk duty since the incident, will be seeking his job back. And even though an internal investigation—suspended after Servin was first charged—has not concluded yet, Chicago's police superintendent, Garry McCarthy, says Servin should not have been criminally charged. Such charges, McCarthy argued, amounted to a "safety hazard". The Chicago Tribune reports:

"It provides a safety hazard," McCarthy told reporters after a promotion ceremony at Navy Pier for about 100 new detectives and several captains and commanders. "And my concern was how is this going to affect policing in general in the Chicago Police Department because every single officer who's out there now might be in a position where they hesitate, and as a result, they could lose their lives."

And it's those privileges granted to police officers, through union contracts, law enforcement "bill of rights," and other local and state measures, that often prevent a problem cop from being fired absent a criminal conviction. Given the number of killings of cops compared to killings by cops, the inability to fire problem cops before they're proven beyond a doubt to have committed criminal acts appears to present more of a safety hazard—to the policed and the police—than the overcharging McCarthy (wrongly) fears exists, which would merely be a byproduct of the inability to terminate cops otherwise. Servin, remember, who a judge let off because he thought he should've been charged with murder instead, will now likely be seeking to get back on the street. He's had a city job the whole time.