For Hillary Clinton, No War but the Class War

The Democrats' only announced candidate so far is tacking hard left on economic rhetoric. 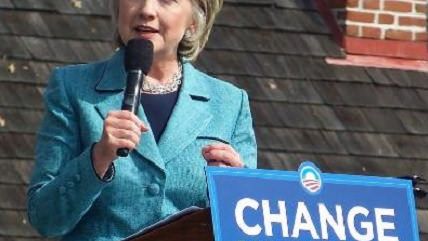 Near the end of a recent New York Times article detailing the imaginary populist roots of Hillary Clinton —the original Elizabeth Warren, her people would have you believe—the reader crashes into this implausible scene:

"In a meeting with economists this year, Mrs. Clinton intensely studied a chart that showed income inequality in the United States. The graph charted how real wages, adjusted for inflation, had increased exponentially for the wealthiest Americans, making the bar so steep it hardly fit on the chart.

"Mrs. Clinton pointed at the top category and said the economy required a 'toppling' of the wealthiest 1 percent, according to several people who were briefed on her policy discussions but could not discuss private conversations for attribution."

Does anyone believe that Hillary was "intensely" studying a chart—one that could barely contain the lines illustrating the real-wage growth of those reviled 1 percenters (how's that for color?)—before she had a socialist epiphany? Does anyone believe that our hero had never even contemplated this well-traveled liberal talking point before coming to a realization that we must overthrow the top 1 percent to save America? In a single meeting? Using one chart?

Well, even if it were true, it would seem a bit impetuous to me. But let's go with it.

It's established media practice to talk about the GOP as the party that's lurched to the far right, an ideologically intractable group on a disturbing trajectory that leads to 2008-era tax rates and other forms of fanaticism. But I would love for someone to point out the last time a Democratic Party candidate suggested that government should topple an entire class of Americans for the good of everyone else. Has anyone, including Barack Obama, ever gone that far? Remember that this isn't just some slip of the tongue; this is Hillary's camp laying out a fantastical story to an accommodating media outlet—going out of its way to make sure the word "topple" would be specifically mentioned in quotation marks. Also, I'd love to know which economists nodded their heads in agreement as Hillary embraced this harebrained Robert Reich zero-sum economic "toppling" theory.

And shouldn't the public know more? Seeing as it's imperative for the political press to find out exactly how a Marco Rubio or Rick Perry—and, no doubt, all prospective Republican presidential candidates—would deal with a theoretical invitation to a gay wedding or what the Republican candidates' thoughts on macroevolutionary theory are, I imagine the press will be scurrying to find out exactly what Hillary meant by her "toppling" comment.

After all, the 1 percent includes anyone making about $350,000 a year—or, as Hillary might put it, booking one speaking engagement. We're talking about business owners, entrepreneurs and folks living off their investments. We're talking about some people who earned their money legally and productively and perhaps even create jobs and make life better for other Americans. Some of those who have "disproportionately" benefited from the economy may even have worked harder. The Democratic Party believes that technocrats have the moral authority to decree who deserves to benefit from growth. So good for Hillary for saying so.

But to understand the Democratic Party's hard left turn on economic policy, think about this: Progressive economist Dean Baker, for instance, is conscripted for the Times piece to help distance Hillary from her husband's economic policies. "I remember when Bill Clinton was running in 1992 and his line was 'putting people first,'" Baker explains. "He just didn't follow through on that"; instead, he emphasized such things as deficit reduction and trade deals. Yes, indeed, Hillary Clinton's handlers want to impress upon you that she will not be repeating Bill's tenure—which saw a strong labor market and strong economic growth and in which median wages grew, poverty shrank and entrepreneurship exploded—but that she will run to the left of Obama, who presided over a stagnant economy and the slowest recovery in history. Yes, only the GOP has lost its way.

Now, obviously, Hillary doesn't really mean any of it. "Toppling" was meant to telegraph to activists that she has embraced hard left-populist economic policies, the kinds of ideas that have taken over her party. And because she has no genuine or cogent philosophical belief system and her own life is an example of how disproportionate wealth works, the rhetoric she offers on this front will often sound clumsy, prefabricated and bogus. She's just not going to be as good at this as Obama. So it's not surprising that, according to the Times, we're going to be hearing a lot of familiar small-fry, feel-good items—hiking the minimum wage, closing corporate tax "loopholes" and paid medical leave—that would neither spur middle-class growth nor close the wage gap.

But it may well win her the election. And really, isn't that all that matters?