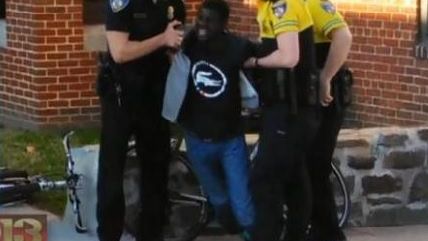 For whatever reason, police unions seem to have a knack at making tone-deaf comments at inappropriate times when poor actions by its members gets more attention than the union's used to. The eyebrow-raising death of Freddie Gray from an unexplained spinal injury suffered while in custody has led to protests in Baltimore, a city whose taxpayers paid out $5.7 million in the last four years to settle more than 100 complaints of misconduct against the police department.

The police union shrugs off the amount—weak tea compared to the $1 million a week Chicago, a little more than twice the size of Baltimore, spends on police brutality lawsuits—as indicative of the city's unwillingness to take the cases to court, which could cost more money in litigation, and has called protests seeking justice for Freddie Gray a "lynch mob." The union insists there's "no indication of any criminal activity whatsoever" and claims protesters want the cops "imprisoned immediately." They've been suspended with pay. The statement from the union, via CNN:

"While we appreciate the right of our citizens to protest and applaud the fact that, to date, the protests have been peaceful, we are very concerned about the rhetoric of the protests," the Baltimore Fraternal Order of Police Lodge 3 said in a statement.

"In fact, the images seen on television look and sound much like a lynch mob in that they are calling for the immediate imprisonment of these officers without them ever receiving the due process that is the constitutional right of every citizen, including law enforcement officers."

If I were found next to the body of a police officer who had suffered a fatal spine injury I'm not sure I'd get the same benefit of the doubt. Nevertheless, when the union says the six officers involved in the deadly interaction with Gray deserve due process like any other citizen they're correct, even if they don't apply the same idea in their own practices.

But that right to due process is, or ought to be, limited to civil and criminal convictions. In an incident with as many questions surrounding it as the police interaction with Gray has, local governments ought to have the power to discipline police officers outside of the criminal process and outside, even, of the administrative process. Tone-deaf union statements like this one in the wake of controversial deaths in police custody help illustrate the danger of permitting public employees, especially those who are armed and ordered to use force to gain compliance, to unionize. When the union says it's "concerned" about peaceful protest, it's not a representative of a voluntary association of employees speaking, but the representative of a body of employees who have the exclusive right to wield weapons on behalf of the government in a certain geographic area.

Careless officers, reckless officers, officers who can't explain fatal spine injuries to suspects in their custody or why they chased someone just because they ran, don't belong in uniform. That's not a matter of "due process" for the government employee, a position that's a privilege not a right, but a matter of public safety and keeping dangerous elements off the streets. Those dangerous, uniformed elements shouldn't be afforded the privileges decades of public union-friendly governments in cities like Baltimore have carved out for them.