Who Is This Mike Huckabee Guy, and Is He Running for President?

He says he'll tell us his plans on May 5. 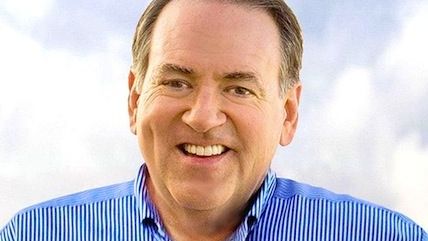 Mike Huckabee didn't confirm tonight that he's running for president, but he told us when he'd let us know. Interviewed by Fox News' Bret Baier, the Republican said he'd make a formal announcement in Hope, Arkansas, on May 5.

1. He's a very religious man. That's no surprise—the Republican primaries overflow with religion—but for Huckabee, an ordained Baptist minister, it's an especially important part of his identity. This is a man who once refused to sign a bill because it referred to tornadoes and floods as "acts of God."

2. His nannying instincts cross ideological frontiers. Huckabee doesn't just want a government powerful enough to take away a person's pot or pornography. He also favors nanny-state causes that usually find more fans among liberals than conservatives. As governor he pushed public schools to track each student's body mass index, and he signed a bill limiting where people were allowed to smoke. In 2007 he said he'd be willing to sign a national version of the same bill, arguing that "we shouldn't allow people to pour the toxic, noxious fumes of a cigarette into a place where people have to work."

The last time Huckabee ran for president, stances like those led the conservative writer Jonah Goldberg to call the candidate a "right-wing progressive." Strange though that phrase may sound, it captures a real part of Huckabee's thinking. The Protestant pietist tradition was a strong influence on the original Progressive Era, and activists under its spell were often as interested in reforming individuals as they were in reforming institutions. Their secularized, health-focused descendants today represent the more intrusive side of modern liberalism, backing sin taxes, smoking bans, and the like. Imagine someone pushing that agenda in its old religious context, and you've got Huckabee. (Well, not all of that agenda. Modern liberals may love public-health arguments for gun control, but Huckabee's a Second Amendment man. On the flipside, he's capable of claiming that homosexuality "can pose a dangerous public health risk.")

3. His progressive tendencies show up in other places too. Huckabee has condemned President Obama's "big-spending agenda," but spending sharply increased in Arkansas while he was in charge. He still balanced the budget each year, as state law requires, but he accomplished that by raising taxes. (During his 2008 campaign, Huckabee liked to brag that he had cut taxes "almost 94" times. He didn't dwell on the 21—or, if you prefer, almost 22—tax hikes that he also oversaw. The hikes were larger than the cuts.) Huckabee also supports farm subsidies, energy subsidies, and trade barriers.

4. He's framing himself as a man-of-the-people populist. But it's not clear how exactly that will affect the issues he campaigns on this time around. There's a GOP contingent that calls for "libertarian populism," arguing that the defense of the common man requires serious reductions in government power, but Huckabee obviously isn't about to embrace their platform. On the other hand, he's well aware that Republicans aren't going to flock to a candidate calling for more redistribution. And so you get videos like this one, released earlier this month, which tries to align Huckabee both with voters in dire economic straits and with voters who want a more limited government, but which offers absolutely nothing in the way of concrete policy proposals:

Huckabee may be more comfortable discussing entitlement spending, which is popular with voters of both parties. Earlier today he attacked Chris Christie for suggesting that Social Security and Medicare should face further means-testing and that the programs' eligibility ages should be gradually raised.

5. He's a hawk. Huckabee's not-officially-a-campaign-yet has released this video, too:

The bottom line: Huckabee's an interesting figure, and people like me are not going to get bored writing about him. And he could certainly have an impact on the race, perhaps by getting into another skirmish about entitlements at just the right moment. But he's not a likely nominee.