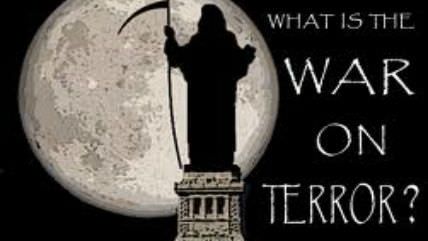 Russell Berman at the Atlantic sums up the disgraceful punting of their constitutional responsibilities on the part of both Obama and Congress: he wages war against ISIS without their say-so, they don't care to be on record giving or withholding that say-so.

The White House, after a long delay, sent Congress a proposed authorization for the use of military forcein February. (The AUMF has become the modern-day equivalent of a declaration of war.) Never mind that the U.S. military had already been bombing ISIS targets in Iraq and Syria for half a year, nor that those airstrikes have continued throughout the two months that Congress has spent reviewing the three-page proposal.

In the last week, the top two Republican leaders in the House have confirmedthat Obama's war proposal is going nowhere, and lawmakers are in no hurry to pass an alternative…

The whole exercise has bordered on the absurd. A quick recap: The administration has argued all along that it doesn't actually need new authorization for the war, because the 2001 and 2003 resolutions that Congress passed—and never repealed—allow for military action against ISIS as a terrorist group that branched off from Al Qaeda in Iraq. Speaker John Boehner demanded for months that Obama submit a formal proposal, but when the White House finally did, he left it for dead…..

I guess Congress' attitude is, it's nice to be asked. But it's not nice to be on record as either being for the attacks if/when they go sour, or being against them next time an atrocity video out of ISIS hits the world. But they continue to let 2001 define an endless war against whoever anywhere.

Reason on the War Powers Act.