Block Bots Automate Epistemic Closure on Twitter. Are You Blocked?

Peer behind the Block Bot! 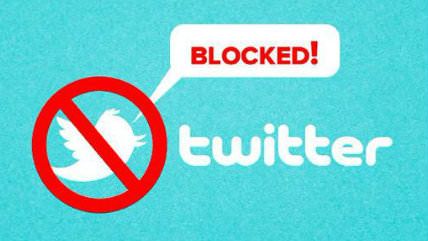 The first time I noticed it I merely found it odd: a person whom I had never interacted with in any way on Twitter had blocked me. But then it started happening more frequently; I would click on someone's handle after seeing an interesting retweet or mention and find myself blocked by yet another stranger.

If you're not familiar with how Twitter works, blocking someone prevents them from following you, messaging you, and showing up in your mentions. The feature was designed to compensate for Twitter's notorious inability to really banish abusive users. Unlike other social media platforms such as Facebook, Twitter makes it easy to create multiple and anonymous accounts, so someone who violates Twitter's terms of service can be back on the platform in about five minutes. Blocking gives any user an instant way to tune someone out entirely.

But as I mentioned: my blockers were people I had never tried to follow and never so much as tweeted "hi" at, let alone anything disagreeable, abusive, harassing, or unkind. And I had few to no friends in common with these individuals, making the chance of me being frequently retweeted into their timelines very unlikely. How did these people even know of me, let alone find me odious enough to block me?

And then I learned about the Block Bot. Created by Twitter user @oolon, the Block Bot "automate(s) the blocking for anyone that signs up, so you don't need to … worry about what trolls are trolling the twittersphere -> they will be removed from your timeline seamlessly," as its FAQ page states. Subscribe to the Block Bot, and anyone added to the list will automatically be blocked by your account. And how does one get on the list?

The short answer is anyone that a blocker defines as block list worthy. If you trust the people adding to the list have similar judgement to you then sign up.

There are three tiers of block-worthy individuals, with the first tier reserved for "accounts that in the opinion of the blockers the vast majority of our subscribers would likely wish to ignore"—that's folks "that appear to engage in aggressiveness, threats, harassment, dishonesty in an effort to infiltrate social groups, impersonating someone, posting shock images, encouraging self-harm, spouting dehumanizing rhetoric, promoting hate speech, etc." Level two is for people who "appear to include slurs, insults referring to identity, humiliation, ridicule, victim-blaming, etc." Level three is for the merely "tedious and obnoxious." Subscribers can block any or all of these tiers.

Another version of the block bot, called the Good Game Auto Blocker, "compares the follower lists for a specific set of twitter accounts that are known to incite the mob campaign to attack a single user. If an account is found to be following more than one of these campaign leader accounts, they are added to a list of problematic users" who are automatically blocked for list subscribers.

Critics of these block bots have objected that the criterion for being added are overly subjective or unfair. Perhaps, but I can't get too bothered by a system folks voluntarily sign up for. People who feel it necessary to preemptively block not just known harassers but anyone who is potentially "tedious"—to cede judgment about the parameters of acceptable discourse to a third party, essentially—are probably not people worth worrying over.

The premise of the Good Game blocker does seem especially flawed to me, though—even if all the accounts deemed "problematic" really are abusive trolls, there are plenty of reasons why one might follow some of these accounts without necessarily endorsing them, especially during the height of a high-profile Twitter dust-ups. During GamerGate, I followed quite a few people I found ridiculously obnoxious because I write about and comment on these sort of controversies. [I also follow some terrible liberals, some terrible conservatives, a few federal-agency propaganda campaigns, and at least one ISIS sympathizer (who followed me first) because I am curious about what these groups and people are thinking, saying, and sharing.]

Another big criticism of the block bot lists has been that there was no easy way to see who was on them—until now. A group called League for Gamers recently launched a site that allows people to check whether any particular Twitter user is on either of these block lists. "While we understand the value some users find in these tools, we hold blocklist operators to a high level of professionalism," the site states. "We believe blocklists should respect the users added to these lists, including their data privacy and reputation."

This morning I checked the status of myself and other Reason editorial staff, as well of a few of our regular columnists and freelancers. As suspected, I am on one of the lists:

So is longtime Reason contributor Cathy Young—also unsurprising, considering Young was active in the #GamerGate debate on Twitter. But while Young definitely butts heads with progressives a lot, I've never seen her be particularly unprofessional or harsh about it. I guess that's why she's only a Level 3 Block Bot offender, too.

Would you believe, however, that not another regular Reason editorial staffer is on either block list? No @JD_Tuccille. No @RobbySoave. No @edkrayewski. I'm not suggesting anyone should be on the list, I just find it hard to believe that I am somehow the most offensive among us to the social justice crowd. Do you think it's my pro-feminism writing? My criticism of transphobic policy? My advocating for states to do a better job catching rapists?

Find out if you've been blocklisted here.