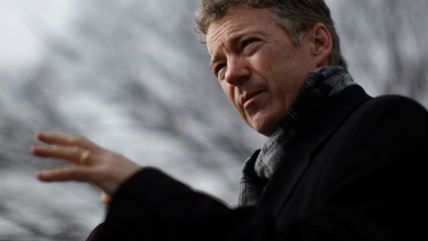 Sen. Rand Paul (R-Kentucky) will officially announce today what he has been beavering away at for more than two years: his candidacy for president. Son of campus heartthrob and three-time presidential candidate Ron Paul (1988 Libertarian Party, 2008 and 2012 Republican Party), Rand owes his political career to his father, but has always sought a different path: winning statewide office instead of gerrymandered districts, seeking in his presidential run actual victory instead of noble, galvanizing defeat.

Reason, the leading journalistic explorer and defender of "Free Minds and Free Markets," has been covering Rand Paul extensively since before he gained office, starting with W. James Antle, III's "The Son Also Rises" from the May 2010 issue of the print magazine, and continuing on to this week, with Brian Doherty's examination of how Rand's campaign is haunted by Ron, Jacob Sullum's lament that Paul's provocative defense of judicial activism in January has been watered down to predicable conservative judge-bashing in April, and Nick Gillespie's commentary that even a less-libertarianish Paul is still far more interesting than the rest of the 2016 GOP field.

The following is a curated tour through Reason's coverage of Rand Paul, designed to provide intellectual ammunition to friend, foe, and fence-sitter alike.

In addition to James Antle's May 2010 campaign profile, there was this March 2011 interview with the new senator by Nick Gillespie and Matt Welch:

That led to this June 2011 cover story, "The Most Interesting in Man in the Senate." A formulation that would later be emulated by a cover piece in Time.

In February 2013, after the elder Paul's retirement, Senior Editor Brian Doherty wrote a New York Times piece asking what's next for libertarianism in politics, with a lot of the answer centering around Rand. In May 2013 we curated a Twitter Q&A/chat-thingy with the senator. In November 2013 I wrote a cover profile of Paul for Newsmax which you cannot read easily, but from which you can see a revealing snippet of foreign-policy-related Q&A. In July 2014, Gillespie got Paul to say that Republicans will only win national elections again if they become more "live and let live":

And in the January 2015 issue of the magazine, I probed the presidential aspirant's views on U.S. foreign policy and interventionism.

You can search through Reason's Rand Paul topic page for a list of pieces in reverse chronological order, or use the search engine to mine entire rich subcategories of coverage, whether it's the longstanding unease many Ron Paul fans have had about his son, Rand's extensive attempts to roll back criminal justice overreach, or his "Hipster Outreach Mofo Party Plan."

But like his father (though in much different ways in terms of strategy and some content), the biggest challenge and opportunity Rand Paul presents in the 2016 race is his less interventionist views on U.S. foreign policy and the security apparat around it. So here in chronological order is a sampling of Reason's coverage of the conflict between Rand Paul and a considerably more hawkish GOP:

"Non-Interventionist Republicans Like Rand Paul May Help More Than Hurt the GOP," Sept. 11, 2013.

As ever, stay tuned to this space for more Rand Paul news.