The 2016 hopeful is vacillating in his support for Indiana's RFRA. 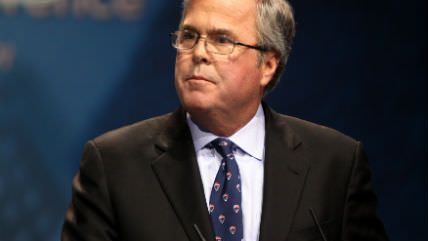 Likely 2016 presidential hopeful Jeb Bush wants to have it both ways.

Earlier this week, Bush called the passage of a Religious Freedom Restoration Act (RFRA) in Indiana "the right thing." The RFRA would have allowed businesses to point to their religious convictions as a defense against adhering to some laws. They might still be forced to go along, but at least they'd have the ability to ask a court to take their beliefs into consideration.

I say the law "would have" done those things, because—you may have heard—it's since been "updated" after a sustained backlash that included several large corporations threatening to pull their business from the state. Gov. Mike Pence ultimately asked the legislature to pass a "fix" clarifying that Indiana's RFRA may not be used to justify discrimination based on sexual orientation and gender identity.

Like Pence, Bush seemed to have a change of heart that corresponded exactly with the popular outcry. Just days after coming out for the original version of the bill, he too clarified his stance—to add that it would probably need to be changed. "By the end of the week, I think Indiana will be in the right place," he said, adding that he also believes "we shouldn't discriminate based on sexual orientation."

Saying that we shouldn't discriminate is a bit of a weasel phrase. It could signify that Bush believes there ought to be laws criminalizing discrimination, or it could just be the statement of a personal belief—that discrimination is morally wrong even if it ought not be legislated against. I hope Bush meant the latter.

Unfortunately, the former is what most of the people threatening to boycott the state of Indiana were looking for—they want to make it a crime to turn away a customer on religious grounds. From a libertarian perspective, that position is highly problematic. As my colleagues Scott Shackford, Robby Soave, and Nick Gillespie (among many others) have all written, people should be free to decide with whom to associate—and that includes choosing not to accept someone's business. Not everyone who opposes gay marriage is a homophobe, and even if they were, as I've pointed out before, being a crappy person is not against the law.

But it's hard enough in the best of times to stand on principle against popular opinion. Right now, with an ascendant mobocracy demanding blood from anyone who won't publicly endorse their commitment to criminalizing those who disagree with them, Bush's backtracking should probably come as no surprise.