The Permanent Medicare Doc Fix: A Bipartisan Agreement to Blow Up the Budget 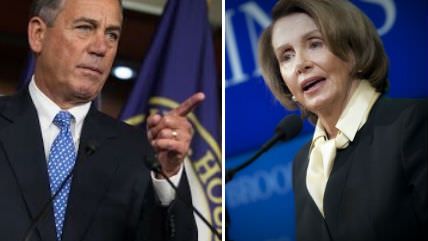 This is what bipartisanship looks like: a $500 billion increase in the deficit in order to please a favorite constituency. A permanent "fix" to Medicare's physician reimbursement formula, the Sustainable Growth Rate (SGR), passed in the House today on a 392 to 37 vote.

The deal does what many, including at times myself, believed for years was all but impossible: It repeals the SGR, which for the last decade-plus has called for significant cuts to physician reimbursements. These cuts that have always been overridden on a bipartisan basis, and there has always been bipartisan support for ending the doc fix charade. Doctors hated it too.

So it's not too surprising to find that the deal was crafted jointly by Republican Speaker of the House John Boehner and Democratic Minority Leader Nancy Pelosi, with backing from the doctors lobby. Opposition from Senate Democrats seems to be waning, and President Obama has issued a statement suggesting he's likely to sign the deal.

The bill, as passed, however, is a budget buster, according to the Congressional Budget Office, which estimated that it increases the deficit by $141 billion over the next 10 years. Supporters argue that the plan's savings materialize over the long term, but an estimate by the budget watchdogs at the Committee for a Responsible Federal Budget found that the fix, which increases Medicare means testing and also sets up regular increases in doctors' Medicare payments, would actually add $500 billion to the debt over the next 20 years.

It's not the worst possible fix; the additional Medicare means testing will make some seniors pay for a larger share of their entitlement benefits, and exert some hopefully real long-term downward pressure on the program's unfunded liabilities. As the Cato Institute's Michael Cannon, who isn't entirely thrilled with the deal, writes, "if you're going to be totally fiscally irresponsible, this is the way to do it." That's right, I think.

The big takeaway here is that it's the total fiscal irresponsibility that makes a bipartisan deal like this possible. Permanent doc fixes had always failed in the past because there was no way to pay for them, or at least no way that enough members of Congress could agree on. The reason this finally passed, after years of fruitless debate and discussion, was that they were all able to agree on an alternative solution: not paying for it. That's bipartisanship in action.