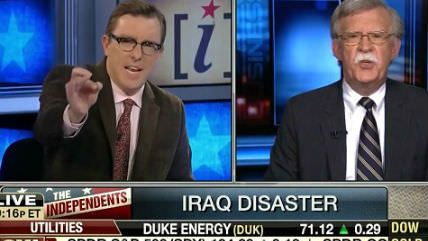 The inconvenient truth is that only military action like Israel's 1981 attack on Saddam Hussein's Osirak reactor in Iraq or its 2007 destruction of a Syrian reactor, designed and built by North Korea, can accomplish what is required. Time is terribly short, but a strike can still succeed.

Rendering inoperable the Natanz and Fordow uranium­-enrichment installations and the Arak heavy­water production facility and reactor would be priorities. So, too, would be the little-­noticed but critical uranium-conversion facility at Isfahan. An attack need not destroy all of Iran's nuclear infrastructure, but by breaking key links in the nuclear­-fuel cycle, it could set back its program by three to five years. The United States could do a thorough job of destruction, but Israel alone can do what's necessary. Such action should be combined with vigorous American support for Iran's opposition, aimed at regime change in Tehran.

This is not new territory for Bolton. At a Conservative Political Action Conference panel a month ago the one-man mustache said "I think our policy for the past 15 years should have been, and would be if I became president, the overthrow of the ayatollahs." And unlike his CPAC co-panelist Sen. Tom Cotton (R-Ark.), Bolton was willing to say the P-word out loud: "The only…alternative is the pre-emptive use of military force."

Other members of the growing Bomb Iran Caucus include Rep. Louie Gohmert (R-Texas) ("I think it's time to bomb Iran"), Rep. Jason Chaffetz (R-Utah) ("Absolutely!"), and foreign policy commentator Joshua Muravchik ("Does this mean that our only option is war? Yes").

One of Bolton's main stated concerns is that Iran's pursuit of nukes will (and is already beginning to) set off a regional nuclear arms race, which would indeed be alarming. But isn't there another possible game-theory scenario here, in which a pre-emptive attack on Iran (like the pre-emptive, WMD-justified attack on Iraq) could incentivize regional powers and various nefarious regimes to go nuclear faster? After all, the U.S. doesn't spend a lot of time engaging in forcible regime change with countries (no matter how lousy) that already have the bomb. And Ukraine, for one, can tell you what happens to your defensive posture after emptying your nuclear arsenal.

If the bombs-plus-regime-change tune sounds familiar, that's because conservative hawks were singing it in 1998 about Iraq, albeit with much greater skepticism about the nuke-destroying efficacy of bombs alone. Here's another New York Times op-ed, this time from William Kristol and Robert Kagan, from Jan. 30, 1998:

Unless we act, Saddam Hussein will prevail, the Middle East will be destabilized, other aggressors around the world will follow his example, and American soldiers will have to pay a far heavier price when the international peace sustained by American leadership begins to collapse. […]

Four heavy divisions and two airborne divisions are available for deployment. The President should act, and Congress should support him in the only policy that can succeed.

One of the defining hallmarks of American foreign policy these awful past 15 years has been the readiness to bomb first, figure out a strategy later. We bombed a nasty regime out of existence in Libya in 2011, and the results have not been very pretty for the interests of either Libya or the United States (despite some premature endzone dancing at first). We invaded Iraq without any workable sense of what comes next. We toppled the Taliban without defining an end game. We're at semi-war right now with the Islamic State, and if there's any noticeable strategy it certainly has escaped my attention. Meanwhile, the Middle East is literally on fire.

In the face of this track record, the burden of proof rests on the interventionists. Not simply to state the scary threat, but to work through the details of what happens next. To the extent that anyone in the Bomb Iran Caucus has sketched those out, the results have been wildly unimpressive. Here's Muravchik:

[A]n air campaign targeting Iran's nuclear infrastructure would entail less need for boots on the ground than the war Obama is waging against the Islamic State, which poses far smaller a threat than Iran does.

Wouldn't an attack cause ordinary Iranians to rally behind the regime? Perhaps, but military losses have also served to undermine regimes, including the Greek and Argentine juntas, the Russian czar and the Russian communists.

Wouldn't destroying much of Iran's nuclear infrastructure merely delay its progress? Perhaps, but we can strike as often as necessary. Of course, Iran would try to conceal and defend the elements of its nuclear program, so we might have to find new ways to discover and attack them. Surely the United States could best Iran in such a technological race.

Much the same may be said in reply to objections that airstrikes might not reach all the important facilities and that Iran would then proceed unconstrained by inspections and agreements. The United States would have to make clear that it will hit wherever and whenever necessary to stop Iran's program. Objections that Iran might conceal its program so brilliantly that it could progress undetected all the way to a bomb apply equally to any negotiated deal with Iran.

Perhaps, but we can strike as often as necessary isn't the strategy of a thinker, it's the chest-thumping of a J.V. football player. Hawks may feel like they've got the wind at their sails again, but they blithely dismiss Americans' lack of appetite for military adventurism at their peril.