The deputy says he called the Humane Society but the Society denies it; a vet says the pony was healthy when the deputy killed him. 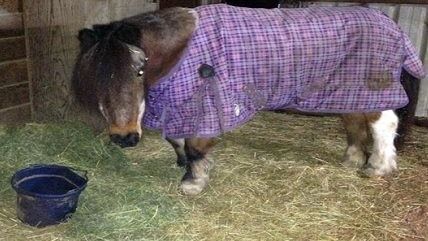 Clackamas County, Oregon, resident Crista Fitzgerald went looking for her pony Gir on a Thursday morning in February, finding him laying in a pool of blood in front of a neighbor's house. The neighbor said she called police when the pony showed up in her front yard and that a sheriff's deputy shot and killed him.

The sheriff's department claims the deputy believed the pony had been hit by a car and had both his legs broken, but Fitzgerald had a veterinarian examine the body, and the vet said the pony had been in good health, except for arthritis that had on set in his old age, until being shot by deputy.

[Sheriff's office spokesperson Nathan Thompson] said he believes the deputy called the Oregon Humane Society to ask about euthanizing the horse before he shot it. A spokeswoman for OHS tells KATU News the deputy never called them.

Thompson also said the deputy called a local veterinarian to ask about euthanizing the horse. KATU News reporter Hillary Lake contacted the vet about that call. He confirmed he did talk to the deputy, that his office offered assistance in euthanizing the horse, but that the officer said he would "take care of the problem on his own" and call a rendering service himself.

Thompson said the deputy made the decision to shoot the horse after also consulting his supervisor.

"There wasn't very much I could say at that point because they shot the pony. I mean, i didn't know how to react," Fitzgerald said.

According to Fitzgerald, the neighbor told the deputy the pony had been hit by a car.

Fitzgerald's husband filed a complaint over the shooting, which the sheriff's department is now investigating. The Oregon Humane Society, however, according to KATU, wouldn't confirm if it had briefly started an investigation into potential animal cruelty before closing it.