Elderly Man Ends Up Topless, On His Knees, and Handcuffed After Cops Mistake His Collector Car for a Stolen One 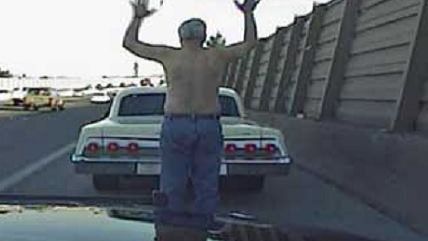 Officers from the Nevada Highway Patrol pulled over a senior citizen and his wife because they misread the license plate on his car and wrongly believed it to be stolen, and then a dispatcher wrongly entered the VIN number and so did not find out the car wasn't stolen. The misunderstanding could've been easily resolved if cooler had prevailed, but they didn't. Cops ordered the man to put the keys on the roof of the car and to step out of the automobile.  8 News Now reports:

Bruins told the I-Team: "He was telling me to do something and I had my hands in the air and he said to do something again and I looked at him and I said, 'are you talking to me?' You know, what's going on?"

Trooper: "Turn around. Turn around the other way."

Bruins to the I-Team: "And it wasn't until I had taken my shirt off and told to get on my knees and handcuffed and I said, 'What's going on? Do you think this car is stolen or something?' And he said, 'exactly right. And their car is going back to its rightful owner.'"

Beverly Bruins said the troopers treated the couple "like we were Bonnie and Clyde." She was removed from the car at gunpoint with a broken leg at the time.

More troopers showed up but the situation was not resolved. One trooper told a supervisor Bruins seems "legit," but a female cop told Beverly to "say goodbye" to her husband and he was taken to jail where, he says, he was denied his nerve medication. He was eventually released and the couple is now suing over the incident.