Restrictive copyright and IP regimes means you can't re-imagine some of your childhood memories. 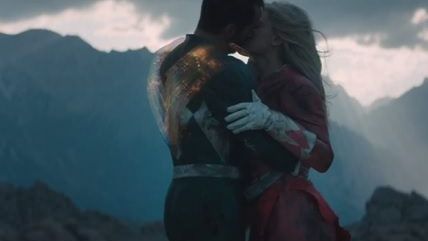 Filmmaker Joseph Kahn directed a short film, "Power/Rangers," based on a story written with James Van Der Beek, who also stars in the 11 and a half minute video. You can watch a safe-for-work version via YouTube:

There was a not-safe-for-work version on Vimeo but it's been taken down. Kahn noted that the film was a "bootleg experiment" that was "not for profit, strictly for exhibition" and that he wasn't claiming any rights to any of the characters, any affiliation with Saban, and wasn't trying to sell any product. Nevertheless Kahn explains on Twitter that the television production company Saban, which owns the rights to Power Rangers, is trying to "shut down" his video.

There's a Power Rangers movie coming out next year, and while there's certainly room in the market for a blockbuster action film and a 10-minute online video, it's no surprise Saban and the other rights holders to Power Rangers would police the intellectual property privileges granted them by the government over the fictional characters.