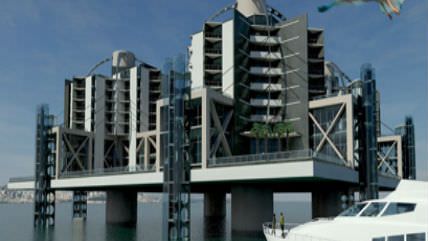 Count on Reason to keep you way ahead of the pop-cultural curve: I first profiled the Seasteading movement back in 2009, and then reported from the first and second iterations of a still-ongoing annual water-based festival spun off from the movement, Ephemerisle.

Now the Seasteading project is the root of a planned reality TV show about attempts to build and survive out on the open seas, with the libertarian promise of creating polities with freedoms beyond those known in terrestrial territories all controlled by states.

Bear in mind that many more reality TV shows are "in the works" than ever air, and bear in mind that one of the things I noted in my earlier reporting about both early Seasteading conferences and even early Ephemerisles, which actually did take place on water (near the Sacramento river delta), was a relative lack of real hardcore nautical building and surviving experience among advocates of the idea of freewheeling oceanic life; this might explain why recruitment for the planned show has to go afield from just people already involved. The Seasteading Institute itself asks you to consider joining the experiment/cast:

The show is seeking a variety of experts and survivalists ready to create a new community on the ocean while building, engineering, and rehabbing residential quarters. If you have what it takes to survive challenging weather and sea conditions, if you have a yearning desire to experiment with ocean-based technologies, if you can bring a skill set that will add to the sea-villages development, then this is an opportunity for you.

You have til March 1 to apply. I'd love to see each and every one of you floating out on a platform in the open ocean, surrounded by TV cameras.

VultureBeat also reported on this today, and names Fusion as the network that intends to air the show, although Fusion's own discussion of the project last week didn't explicitly say they intended to air it.

Also remember that it's the rare reality show that makes the wild dreams of its stars seem noble and worthwhile; but it can happen, especially with shows with a daring-build element. Whether to laud, mock, or just look on with the blandly judging eyes of tens of dozens of couch potatoes across America, it promises if it becomes real to at least potentially kickstart moving Seasteading from concept to physical reality.