Both brothers use muscular-sounding bromides that substitute for understanding. 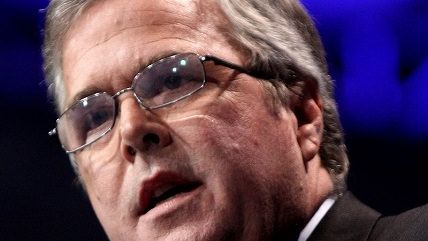 Foreign policy is a complicated and bottomless topic, which forces politicians to address it with abstract words and punchy sound bites. Smart politicians know the difference between the messy realities and the simple pictures they paint. The danger lies with politicians who mistake the slogans for reality.

Jeb Bush asserts that when it comes to these matters, he should not be confused with his brother or his father. "I am my own man," he declared in a speech Wednesday before the Chicago Council on Global Affairs.

In fact, it would be unfair to suggest that he got all his ideas about the world from his brother and father. It would be equally off-base to suggest that he has any of his own. What he, like most of the other Republicans who may run for president, has are muscular-sounding bromides that substitute for understanding.

A typical paragraph went: "Under this administration, we are inconsistent and indecisive. We have lost the trust and confidence of our friends. We definitely no longer inspire fear in our enemies."

The terms Bush uses are loaded but intangible, anesthetizing the brain with their lack of specificity. Inconsistent and indecisive? I thought the charge against President Barack Obama regarding Iraq and Afghanistan is that he was too consistent and inflexible in his determination to withdraw.

Nor does Bush admit that similar complaints have been made about virtually every president. His father was charged with vacillation for failing to remove Saddam Hussein. Richard Nixon was accused of betraying a commitment to Taiwan when he went to China.

We have lost the confidence of our friends? Critics leveled that charge against George W. Bush and Ronald Reagan, whose policies were unpopular in Western Europe. We are forever disappointing our allies, and vice versa.

We no longer scare our enemies? The United States is a superpower that has been at war for 13 years, has brought about regime change in multiple countries, and is currently leading an air campaign against the Islamic State while conducting drone wars in Pakistan, Yemen and Somalia. If those facts give our enemies no anxiety, our enemies are exceedingly dim.

Why might Iran want nuclear weapons? Not because it doesn't fear us, but because it does. Vladimir Putin invaded Ukraine partly out of worry it would join NATO, bringing an anti-Russian military coalition farther into his backyard.

Bush acts as though saying something is tantamount to making it happen. He demands that we force Iran to stop all nuclear enrichment, without explaining how. Its nuclear program, as he didn't mention, expanded while his brother was president.

In his immortal essay "Politics and the English Language," George Orwell identified the problem with this sort of advocacy. "A man may take to drink because he feels himself to be a failure, and then fail all the more completely because he drinks," he wrote. Our use of English, he said, "becomes ugly and inaccurate because our thoughts are foolish, but the slovenliness of our language makes it easier for us to have foolish thoughts."

Bush's speech is a model of what Orwell lamented. To deny lethal defensive weapons to Ukraine, Bush said, is "feckless," while offering no reason to think they would change the outcome.

Obama has done about as much for Ukraine as George W. Bush did for Georgia when Putin invaded that country, which got only humanitarian supplies from Washington. Like Bush then, Obama takes the view that we should not intervene to escalate a conflict that Russia can easily win.

Jeb has a simple idea for the Islamic State: "You've got to tighten the noose, and take them out." Can air power alone do that, or will we need ground troops? How many? For how long? "Take them out" is not a plan. It's a wish.

The president's critics are fond of lamenting his alleged eagerness to appease and reluctance to lead. But the blizzard of pejoratives masks a reluctance to say what steps we should take in specific places, what costs they would involve, and how they would make us safer. Invading Iraq was supposed to make us secure, but 12 years later we face a new terrorist threat sprouted from the same soil.

Before the 2003 invasion, President Bush said, "A liberated Iraq can show the power of freedom to transform that vital region, by bringing hope and progress into the lives of millions." Like Jeb's speech, his promise sounded good and meant little.