Sledding bans are all the rage. Who knows if they actually work. 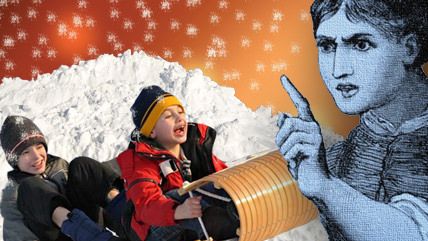 Just in time to stop some winter fun in the nation's capital, D.C. police have begun enforcing a ban on sledding on Capitol Hill grounds. But this is only the latest escalation in the government's war on sledding.

Watch below for Reason TV's take on Uncle Sam's efforts to protect civilians from the dangers of the sled.

Written by Ted Balaker (@tedbalaker). Produced by Balaker and Matt Edwards (@MattChrisEd). Edited by Edwards. 1:33 minutes. Original release date was February 2, 2015, and original writeup is below.

Sure flattening monkey bars, shortening slides, and rubberizing pavement may not actually make kids safer (and it may leave them less prepared for the real, bubblewrap-free world), but the march to make kid's lives duller continues. The latest target: sledding.

Poor kids. Everyone's browbeating them to burn more calories, meanwhile cities and towns across the land are outlawing one of winter's most beloved outdoor activities. City officials will do anything for the children(!), but even most of them seem to acknowledge that sledding bans are more about protecting cities from lawsuits than protecting kids from injuries.

In fact, bans might actually make sledding more dangerous. They could prompt kids and teens to head to more perilous sledding spots to avoid getting busted. Some cities ban sledding in all but a couple of spots, which could lead to overcrowding and increase the chance of collisions.

Nanny of the Month is written Ted Balaker (@tedbalaker) and produced by Balaker and Matt Edwards (@MattChrisEd). Edited by Edwards.

Scroll down for downloadable versions and subscribe to Reason TV's YouTube channel for notifications when new material goes live.

Ted Balaker produced the Nanny of the Month and Don't Cops Have Better Things to Do? series for Reason TV, and is co-founder of Korchula Productions, a film and new media production company.