Only the officer who shut the dashcam off was "disciplined" in any way. 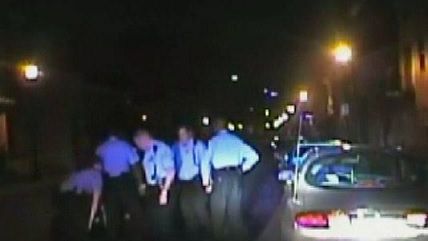 Police in St. Louis say they pulled Cortez Bufford over last April because his car matched the description of a vehicle linked to a "shots fired" call. They say he resisted arrest, which necessitated the use of force. A dashcam video shows police physically pulling Bufford out of the car and then appearing to kick him before one of the cops realizes the dashcam is on. KSDK-TV reports:

They are on the ground for nearly two minutes when you hear an officer say, "we are red right now," which means the camera is on, and then the camera shuts off.

"Hold up, everybody hold up, we are red right now, so if you guys are worried about the cameras just wait," the unidentified officer said.

Police say they found a gun and marijuana in Bufford's car. (What did he think this was, a free country?) He was initially charged with possession of the marijuana and gun, and resisting arrest, but all the charges were dropped. The city attorney suggested they were dropped because of the problem with the dashcam video, which her office says it also referred to internal affairs and investigated itself.

The city attorney says she found no conduct by the cops on the video that violated state law. Only the officer who shut the dashcam video off was "disciplined" for not following policy. As I noted yesterday, these are the kinds of instances where applying zero tolerance could take potentially dangerous officers off the street and help ensure residents keep getting home safe at night. Authorities may deny the cops who allegedly assaulted Bufford did anything wrong but must admit turning off the camera violated policy. It ought to be among the fireable offenses for police officers.

Bufford is suing the police department, so the conduct, for which only one of the officers was disciplined, could yet cost the city. But it won't cost the cops.

Watch a portion of the video below: