The State of Jefferson Moves One Step Closer to Reality 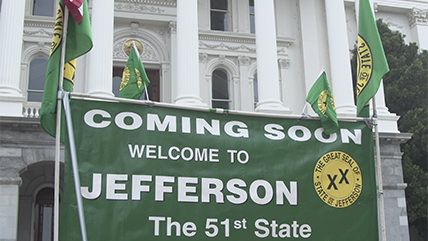 "The State of Jefferson Moves One Step Closer to Reality": Produced, shot, and edited by Alex Manning.

Original release date was February 10, 2015 and the original writeup is below.

On Thursday, January 15, 2015 a small group of people gathered in front of the Califonia State Capitol in Sacramento, California. They mostly wore green and chanted slogans like "The time has come for fifty-one." This group is part of the State of Jefferson movement.

The State of Jefferson is a group of people who are fighting to take a handful of counties in Northern California and seperate to become its own state.

They were gathered at the state capitol to turn in declarations from three new counties to separate from the state of California. With their goal set at 10 to 12 counties and the current number sitting at 7, they are about half way to reaching their goal.

Both California's state legislature and the U.S. Congress would have to approve the plan to make Jefferson a reality. And while that is unlikely the spporters of the State of Jefferson keep moving forward towards their goal.