He can't be trusted to respect citizens' rights. 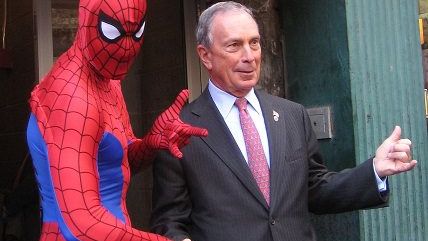 Former New York City mayor—and professional busybody and opponent of civil liberties—had some choice words for black kids during a question-and-answer session at the Aspen Institute last week. He accused young African Americans of violent nihilism and said that it was necessary to take away their right to have guns.

He also approvingly cited a speech by a black minister who had asked the members of his congregation to stop-and-frisk their kids so that "the mayor wouldn't have to."

According to the Aspen Times:

Bloomberg claimed that 95 percent of murders fall into a specific category: male, minority and between the ages of 15 and 25. Cities need to get guns out of this group's hands and keep them alive, he said.

"These kids think they're going to get killed anyway because all their friends are getting killed," Bloomberg said. "They just don't have any long-term focus or anything. It's a joke to have a gun. It's a joke to pull a trigger."

At one point, the former mayor brought up New York City's stop-and-frisk practices, which gained national attention in 2011. Bloomberg said that during his last year in office, a minister at a Baptist church in Harlem invited him to speak.

"While I'm sitting there waiting for him to introduce me, he said to his congregation, 'You know, if every one of you stopped and frisked your kid before they went out at night, the mayor wouldn't have to do it,'" Bloomberg said. "And so I knew I was going to be okay with that audience."

It's possible that this is a less-than-charitable interpretation of his remarks at the event, and that proper context would mitigate how offensive they are. Because they are indeed offensive.

But they do fit the approach that the man followed as mayor of NYC: presuming that some people, on account of their skin color, were likely to be up to no good and merited police detention. It seems that in Bloomberg's view, young black people are not fit to take care of themselves—or even capable of it—and thus should have no right to own guns.

If Bloomberg could be bothered to read the Constitution, he would know that there are several fairly important provisions written for the express purpose of preventing the government from taking away Americans' guns and from discriminating on the basis of race. It's still unconstitutional if you do both at the same time.