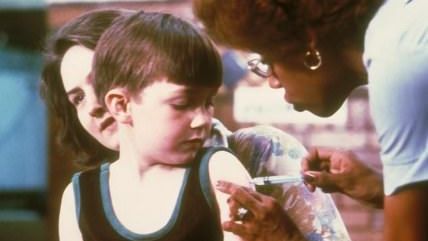 With the recent reemergence of measles in the U.S.—a highly contagious viral infection that was once presumed eradicated by the measles vaccine—calls have come from various quarters for the mandatory vaccination of people against communicable diseases. This has made its way into politics, as various potential Presidential candidates feverishly assert their support for getting immunized, while at the same time trying painstakingly to avoid any controversy.

It has recently been suggested that mandatory vaccination be a precondition for enrollment in Medicaid. After all, "if you want the taxpayer to pick up the tab, you follow standards of care." Otherwise the taxpayer winds up picking up an even bigger tab if the Medicaid patient contracts a serious infectious illness. This proposal makes sense.

Even under the Affordable Care Act, nobody is forced to seek taxpayer-funded health care through a government-run exchange. It is a voluntary transaction. The person who seeks enrollment in Medicaid is not prohibited from using cash or charity or purchasing private health insurance (free of subsidies) outside of any exchange.

Private health insurance companies, of course, should have every right to require vaccination as a condition of selling the policy to a subscriber—or to risk-adjust the premium rate for those who choose not to get vaccinated. This is a private, voluntary transaction. Notice I wrote, "should." Under the ACA, the costs of those who choose to not get vaccinated get passed along to everyone, because insurance is "community rated" and "guaranteed issue" under the ACA.  Under the ACA people may not be charged different premiums on the basis of different risks (as is the case in a true insurance market). Under a truly market-based system, the cost would be borne by the person who chooses not to get vaccinated, in the form of a higher premium, and wouldn't be "socialized."

It has also been suggested by some libertarians that vaccination be a mandatory precondition of admission to public schools—with almost no exception. But attending a public school is not analogous to enrolling in Medicaid.

K-12 education has been mandatory in most states since the beginning of the 20th century, and the government-monopoly school system makes it very difficult (and unaffordable to many) to obtain the education by any means other than the public school system. Most people cannot afford to support the public school system through the taxes they pay and still have enough money left over to pay for private or parochial school (although some parents of modest means make heroic sacrifices to do so). And not everyone has the time or capability to engage in home schooling. When it comes to enrolling children in public schools, most parents are trapped.

It is also dangerous to use government-funded monopolies which people are mandated use as leverage to extract certain behaviors from people. It becomes a slippery slope. One day it can be mandated vaccination. The next day it can become mandated weight-loss or mandated time spent at the gym–or mandated indoctrination in some viewpoint with which the parents may disagree.

For this reason, this libertarian physician doesn't support mandatory vaccinations as a precondition for admission to public school. I favor opt-outs for religious or personal belief reasons, as is the case in my state of AZ, California, and many if not most states.

I suggest what I think might be a reasonable way to "thread the needle" on this tough issue: allow a public school to require that parents keep their children out of school in the event of an outbreak of a contagious disease for which they refused vaccination, and not allow the children back into school until the threat has been deemed to have ended by public health authorities. This way, the parents must weigh their perceived risk of vaccinating their child against the risk of their child missing a significant amount of school days.

While this may not be a perfect solution, I think it provides a practical way to accommodate the rights of individuals and parents with the legitimate safety concerns of the population.

Jeffrey A. Singer practices general surgery in metropolitan Phoenix and is a senior fellow at the Cato Institute.