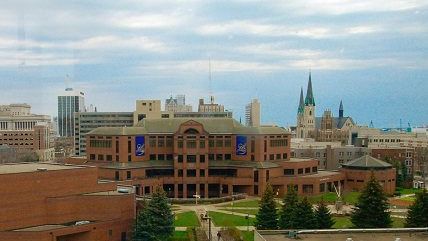 Marquette University is moving forward with its plan to fire a tenured professor over his criticisms of an instructor who wouldn't let any of her students speak out against gay marriage in class. The controversy is interesting for a couple reasons—a Catholic university is essentially punishing a professor whose views on gay marriage are perfectly aligned with church doctrine, for one thing—but most notably, raises important questions about the institution's commitment to academic freedom.

The professor, John McAdams, is known for espousing politically conservative views. He wrote on his blog about a situation involving an instructor named Cheryl Abbate who had told one of her students not to express opposition to gay marriage in class because that opinion was offensive. Abbate considered McAdams' blog post a mischaracterization of her position, according to Inside Higher Ed.

Soon enough, the university took action—against McAdams. Dean Richard Holz suspended him pending a review of his conduct and ordered him not to set foot on campus. The Foundation for Individual Rights in Education has listed all the ways in which Marquette's actions violate the university's own adjudication and free speech policies:

In a January 30 letter calling for McAdams's immediate reinstatement, FIRE cautioned Marquette that unilaterally suspending McAdams for the opinions expressed on his blog violated his freedom of speech and academic freedom. FIRE also pointed out Marquette's multiple violations of faculty policies, noted its public insinuations that McAdams constituted a threat to campus safety, and highlighted the severe threat to free speech posed by Marquette's claim that McAdams was directly culpable for the actions of unknown individuals who allegedly harassed or threatened Abbate after reading his blog.

While this isn't a First Amendment case—Marquette, a private institution, is legally entitled to play thought-police if it wants—it is an open-and-shut case of academic muzzling. But Marquette administrators are undeterred, and have begun the process to revoke McAdams' tenure and fire him. This is a serious step backward for an institution that purports to value free and robust dialogue.

And though I don't agree with the Catholic Church's unlibertarian stance on gay marriage, it seems more than a little silly for an ostensibly Catholic institution to kick a professor off campus for defending this position. But perhaps deference to sensitivity is a superseding religious doctrine.