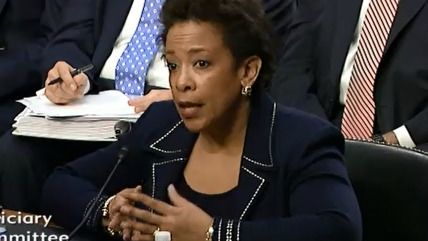 During her confirmation hearings last week, Loretta Lynch, President Obama's choice to succeed Eric Holder as attorney general, called civil forfeiture, a form of legalized theft in which the government takes people's property without accusing them of a crime, "a wonderful tool." Lynch, currently the U.S. attorney for the Eastern District of New York, suggested that innocent owners need not worry about getting hammered by this tool, because forfeiture "is done pursuant to supervision by a court," and "the protections are there."

In light of a forfeiture case that Lynch's office had abruptly dropped the previous week, her assurances rang hollow. The case, involving $447,000 that the government stole from a Long Island business and sat on for nearly three years, illustrates the injustice inflicted by seizures in which a "crime" that harms no one becomes an excuse for bank heists that enrich the agencies perpetrating them.

Since 1970 the humorously named Bank Secrecy Act has required financial institutions to report deposits of $10,000 or more to the Treasury Department, because such large sums of cash are obviously suspicious. You know what else is suspicious? Deposits of less than $10,000, because they suggest an attempt to evade the government's reporting requirement, which has been a federal crime, known as "structuring," since 1986.

In 2012 a Nassau County, New York, detective decided the banking records of Bi-County Distributors, a family-owned business that sells cigarettes and candy to convenience stores, were "consistent with structuring." That judgment was enough to trigger an IRS seizure of all the money in the account, which caused an immediate financial crisis for Bi-County's owners, brothers Jeffrey, Richard, and Mitch Hirsch.

For the next 32 months, the Hirsches struggled to keep their business afloat, relying on credit extended by longtime vendors. In all that time, the brothers never got a hearing before a judge. Instead they received a series of offers from Lynch's office, which refused to give the money back but said the Hirsches could have part of it if they surrendered the rest.

In the end, with her confirmation hearings looming and the case generating negative publicity, Lynch agreed to return all the money. "Nobody in America should have to live through the nightmare we've experienced," says Jeffrey Hirsch. "Civil forfeiture nearly destroyed our business, even though we did nothing wrong."

The Bi-County case is by no means unique. The Institute for Justice, which represented the Hirsches, has lent its pro bono assistance to several other owners of cash-intensive businesses who inadvertently aroused the government's suspicion by making insufficiently large deposits, including an Iowa restaurateur and a Michigan grocer.

In all of these cases, there was no evidence that the money came from illegal activity, that the business owners were deliberately trying to hide their deposits, or that they knew doing so was illegal. Yet under civil forfeiture rules, their frequent deposits below the $10,000 threshold supplied "probable cause" to seize their hard-earned money.

From 2005 to 2012, according to a new report from the Institute for Justice, the IRS seized $242 million based on suspected structuring in more than 2,500 cases. During that period, the number of cases rose fivefold and revenue increased by 166 percent, but the gap between the amount seized and the amount ultimately forfeited also grew, suggesting the IRS has becoming increasingly reckless with the rights of innocent owners.

After The New York Times started asking questions about these money grabs last October, the IRS said it "will no longer pursue the seizure and forfeiture of funds associated solely with 'legal source' structuring cases unless there are exceptional circumstances." Legislation introduced last week by Sen. Rand Paul (R-Ky.) offers a more reliable solution, requiring prompt probable-cause hearings for people whose money is seized and allowing forfeiture only when they "knowingly" sought to avoid bank reports of "funds not derived from a legitimate source."

Contrary to Lynch's assurances, the protections are not there. But they could be.