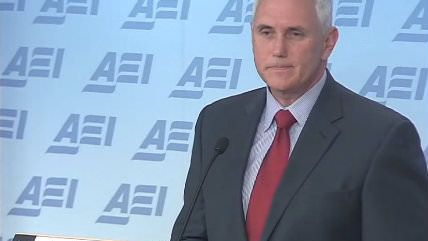 After months of negotiation with the Obama administration, Republican Gov. Mike Pence has cut a deal for Indiana to become the 28th state to expand Medicaid under Obamacare.

The deal, and the conservative-friendly terms it is being presented in, reveal how eager Pence is to portray his participation as something other than a cave to the administration and a giveaway to hospital lobbyists.

The Indiana deal is based on a proposal, first introduced last May, to expand the program under the aegis of the state's 2008 Medicaid pilot, known as the Healthy Indiana Plan (HIP). Pence described his proposal, dubbed HIP 2.0., as a multi-tiered plan with different service levels that would rely partially on health savings accounts, and required beneficiaries to pay a small monthly premium or risk losing coverage.

When the proposal was introduced, Pence restated his opposition to Obamacare, and described his plan as an alternative. "Reforming traditional Medicaid through this kind of market-based, consumer-driven approach is essential to creating better health outcomes and curbing the dramatic growth in Medicaid spending," he said, according to the Indiana Star.

Some of those elements—in particular, the requirement that some beneficiaries pay small monthly premiums that would be deposited into a health savings account—were controversial with supporters of traditional Medicaid program, and since May of last year, Pence and the administration have negotiated over the details.

Pence's announcement today makes it clear that the governor got at least some of what he wanted. On Twitter, the governor noted that the plan "includes elements that have never before been approved by [the federal government] for a program of this magnitude," a Tweet that links to a slide noting the inclusion of health savings accounts. This suggests that the administration was willing to bend somewhat in order to encourage participation in the Medicaid expansion.

But while premiums will be part of the reform, they will be essentially meaningless for those before the poverty line, where most benefits cannot be cancelled for non-payment. In addition, the administration notes in a press release that the deal did not include a work requirement.

Pence, meanwhile, is still trying to frame the plan as a conservative reform. "Medicaid isn't a program we should expand," he Tweeted today. Instead, he said, it's one "we should reform & that's exactly what we accomplished with HIP 2.0."

But of course the deal is an expansion of Medicaid under Obamacare. That's why the administration wanted it and agreed to it. Pence obviously knows that it is an expansion. His previous Tweet declared that effective next month, the HIP plan "will be available to more Hoosiers than ever before."

Even more desperately, Pence also insists that the program "will be fully funded at no additional cost to [Indiana] taxpayers" and "will require no new state spending and no new taxes." This is only true in a way that hardly matters. Obamacare's Medicaid expansion is funded federally; according to the Congressional Budget Office, the expansion will cost more than $900 billion over ten years.

Indeed, the lure of federal money is one of the major reasons Pence signed onto the plan. As Philip Klein of The Washington Examiner noted last May, Pence's office worked closely with hospital lobbyists to develop the expansion plan, which the Indiana Hospital Association approved. In essence, Pence brokered a lucrative deal between the hospital lobby and the Obama administration using taxpayer money, then decided to tout it as a "market-based" plan.