Thanks for Democracy, Greece, But Don't Let the Door Hit You on the Way Out of 1st World! 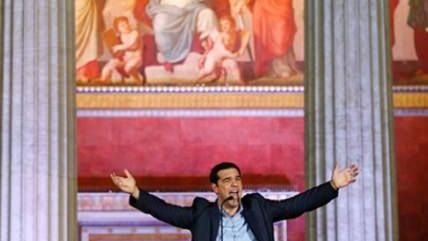 So the Syriza has won the recent election in Greece and its leader, Alexis Tsipras, has vowed to stand against the "vicious cycle of austerity" foisted on the country by its creditors. And by the general guidelines of the European Union (EU), which insists that its members at least pretend to be serious about being able to their governments' books.

It's always nice to see a country peacefully change governments, especially when the incoming group apparently represents the will of the people. Nicer still to see it happen in Greece, the country that in many ways birthed the notion of representative democracy and has a long history of autocratic regimes and often violent protests.

But don't be fooled for a minute that anything happening in Greece has to do externally imposed "austerity" programs. The problems with the Greek economy stem from a basic, simple fact of ecoonomcs: Eventually the bill comes to due. You can't continue spending money you don't have, especially when you're a small economy that has to borrow dough from other, larger places. The homeland of Sophocles going bust and possibly being kicked out of the EU isn't a Greek tragedy. It's a sign that there is some order in the universe.

Recall the reasons for Greece's dire straits: Not simply years but decades of wildly unbalanced spending that culminated with debt representing almost 200 percent of the country's economy. The EU's basic rule is that countries are not supposed to have debt that amounts to more than 60 percent of GDP and the organization's regulators stupidly turned a blind eye to that. The idea of keeping debt to GDP at lower levels is not simply some sort of Nordic puritan fetish; it's a sign that a country is neither taxing nor spending too much and it also means that if and when a crisis hits (as they do from time to time), a nation will have more options in responding, including taking on debt in the short term.

Even the leftwingers at University of Massachussetts agree that large, persistent deficits and subsequent national debt correlates with slower growth and reduced outputs over time. Ironically, they came to that conclusion while critiquing the "debt overhang" theory of Carmen Reinhart and Kenneth Rogoff in 2013.

Researchers affiliated with the University of Massachusetts at Amherst discovered a coding error in Reinhart and Rogoff's data, re-ran the numbers and concluded "the average real GDP growth rate for countries carrying a public-debt-to-GDP ratio of over 90 percent is actually 2.2 percent, not -0.1 percent."

Which is to say that U Mass folks came up with numbers that correspond almost exactly to what Reinhart, Rogoff, and Vincent Reinhart found in their April 2012 paper, "Debt Overhangs: Past and Present." Looking at 26 debt overhangs in 22 advanced economies since 1800, "The authors find that on average, debt levels above 90 percent are associated with growth that is 1.2 percent lower than in other periods (2.3 percent versus 3.5 percent)."

The election of an "anti-austerity" government in Greece will reignite debates over "austerity measures" in response to recessions and other economic downturns. Hopefully this time around, the debate will be more grounded in actual policies and a clear distinction about the forms of austerity. Broadly speaking, austerity measures refer to a government trying to reduce deficits by cutting spending, raising taxes, or some combination of the two as a way of reducing its debt-to-GDP ratio. There is, however, a huge difference between which path is taken. Cutting governmet spending tends to have better results than raising taxes or a combination of spending cuts and tax hikes. As Reason columnist and Harvard's Alberto Alesina, who co-authored a major study on austerity in 2013 for the Mercatus Center, wrote in Forbes:

"Austerity" implemented through tax hikes is harmful, but austerity based on appropriate spending cuts is the best way to reduce a country's public debt burden. Implementing pro-growth reforms as part of the fiscal adjustment process can minimize any economic cost that budget cuts may have. This is especially important in the case of highly regulated economies where the government spends about half of its GDP….

It's easy to understand why increasing taxes during a downturn exacerbates problems. Such a move sucks money out of people's pockets and puts it in the hands of government, which at its best is going to lose some of it in simple bureaucratic waste. But there's more to why fiscal adjustments made up of mostly or all spending cuts can sometimes (not always, but sometimes) counterbalance a downturn or even be expansionary. Alesina and de Rugy write:

The standard explanation is that lower spending reduces the expectation of higher taxes in the future, with positive effects on consumers and investors….spending-based fiscal adjustment accompanied by supply-side reforms, such as liberalization of markets for labor, goods, and services, readjustments of public sector size and pay, public pension reform, and other structural changes tend to be less recessionary or even to have positive economic growth. Such reforms signal a credible commitment toward more market-friendly policies: less taxation, fewer impediments to trade, fewer barriers to entry, less union involvement, less labor market and business regulation.

This argument is supported by a wide range of examples, including Japan in the 1980s, Canada and Sweden in the 1990s, and Germany in the mid-2000s. Needless to say, Greece's austerity measures were accompanied by effectively no serious structural reforms in a country that was always far more generous in its benefits than even other EU members.

The full paper is worth reading, as is de Rugy's work on how "balanced approaches" to austerity (that is, combing tax increases and typically mild spending cuts or reductions in the rate of spending increases) don't work.

When it comes to Greece, it's worth remembering that its economy has been in crapper for a long time, even before the financial crisis hit. By most accounts, the creditor nations in the EU have wisely spent the past few years insulating themselves from the inevitable collapse of the Greek economy and the government's default. Which means it may well finally be time to say ????????? and ???? ????! to the birthplace of democracy.