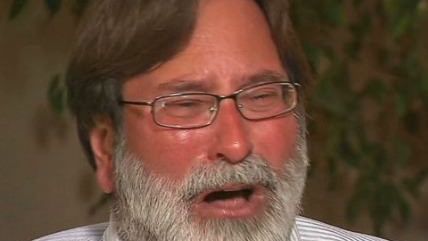 Richard Martinez, whose 20-year-old son, Christopher Ross Michael-Martinez, was murdered by Elliot Rodger in Isla Vista, California, last year, will be in the audience at tonight's State of the Union address, presumably so he can serve as a prop when President Obama pays lip service to gun control. Martinez is an excellent choice, because he embodies Obama's approach to this issue, which consists of citing horrific acts of violence while advocating policies that have nothing to do with them.

To be fair, that is the gun control movement's general strategy, and Martinez's attraction to it is perfectly understandable as a response to his loss and an attempt to give his son's death meaning. The Los Angeles Times notes that gun controllers turned Martinez's scream after the massacre—"Not One More!"—into a rallying cry. But a rallying cry for what? When grief drives public policy, it is fair to ask whether that policy makes sense.

The Times mentions two policies that Martinez has been advocating since the Isla Vista massacre, which he memorably blamed on "craven, irresponsible politicians and the NRA." One response, embodied in a California law enacted last fall, strips people of their Second Amendment rights based on claims that they pose a danger to themselves or others. Such claims can be made by a police officer or by "an immediate family member," which includes not just spouses, children, siblings, and parents but also in-laws and roommates, both current and former. As I noted at the time, the law's standards for issuing a "gun violence restraining order," which can initially be obtained without notice or any sort of adversarial process, are pretty flimsy, leaving lots of room for mistakes and mischief. Furthermore, the connection to Elliot Rodger's crimes is rather mysterious. Although Rodger's mother was at one point concerned that he might harm himself (based on a YouTube video she had seen), as far as I know no one in his family was aware that he owned guns. The Times obfuscates this point, saying "Elliot Rodger, the Isla Vista killer, had guns despite his family's fear that he posed a threat."

The other policy Martinez favors is also unrelated to his son's death. Martinez backed a successful ballot initiative in Washington state that requires background checks for all gun transfers, including private sales. But California already has that policy, so we needn't speculate about whether it could have prevented the Isla Vista murders. Rodger bought three handguns in three separate transactions, and each time he was cleared by the California Department of Justice. He passed those background checks because he did not have a disqualifying criminal or psychiatric record. In California that means not only that he was never involuntarily committed but also that he had not been put on a 72-hour psychiatric hold for evaluation as a possible threat to himself or others within the previous five years.

Even if the policies Martinez is pushing either did not or would not have saved his son, that does not necessarily mean they would not prevent other mass shootings. But the pattern of facts in this case—a killer with a clean background who used legally purchased guns and never showed enough "warning signs" to be legally restrained—is typical of mass shooters. Possibly this is a problem that has no simple solution.

Martinez conceded as much in the weeks after Rodger killed his son, demanding that Congress "get to work and do something" even though he admitted that "we don't know what we are doing." Since then he has shifted his focus to the state level, where he has been more successful, assuming that success is measured by passing new laws of dubious fairness and effectiveness. Although he calls gun violence "a complicated problem," his framing of the issue is not exactly nuanced. "I can't believe that the gun lobby can win," he tells the Times. "They're worried about profits; we're worried about our kids." His appeal to Obama should be obvious: They speak the same language.