Obamacare Goes to Its Caretakers: Another Top Health Official Steps Down

Marilyn Tavenner, one of the key officials behind Obamacare's botched federal exchange, is leaving her post. 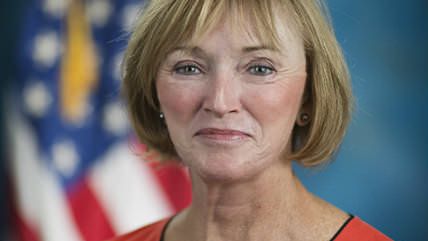 Marilyn Tavenner, the current administrator of the Centers for Medicare and Medicaid Services (CMS) and a key player in the implementation of Obamacare since she took a job with the administration in 2010, will step down, according to a report by Jonathan Cohn and Jeffrey Young in The Huffington Post.

Tavenner had bipartisan support when she took the job—she was confirmed into her current position in 2013—and she's never been as controversial a figure as Kathleen Sebelius, who oversaw the Department of Health and Human Services during much of the Obamacare implementation process.

But Tavenner's tenure at CMS has been rocky, marked by high-profile failures and errors.

She played a major role in the 2013 rollout of Obamacare, overseeing the agency that managed the creation of the botched federal exchange. As Cohn and Young note, reports strongly suggest that poor management from CMS contributed significantly to the launch-window failures of the system. Tavenner herself later apologized for the problems with the federal government's online enrollment system.

More recently, Tavenner misreported Obamacare enrollment in September 2014 testimony to Congress, inflating the figure by 400,000 by including dental plans that should not have been part of the count. After the error was discovered, Sylvia Matthews Burwell, who took over for Sebelius at HHS last year, said that the administration would work to ensure "this kind of mistake does not occur again after we understand why it happened."

Andy Slavitt, the second in command at CMS, will take over for Tavenner on an acting basis.

Tavenner's departure is the latest in a string of departures by senior officials who played key roles in implementing the health law. Sebelius left HHS last year, and Nancy-Ann DeParle, a White House staffer who ran the Office of Health Reform, left in 2013. In addition, 28 of the Senators who voted for Obamacare are now gone, having either left office or lost elections.

Obamacare, then, is increasingly out of the hands of its founders and is now being managed by a second generation of caretakers—a recognition, in some sense, that the people who first put the law in place struggled to make it work.