How Financial Aid Drives Up the Cost of College

Massive infusion of money through subsidies and student aid offers no incentive to control costs or seek out efficiencies in higher education. 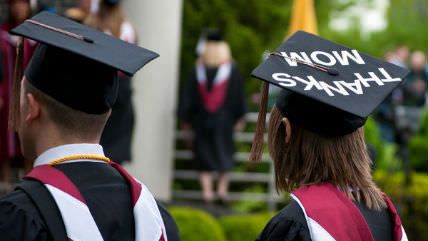 This past fall, Virginia Sen. Mark Warner toured the state to talk about college debt—a burden that weighs heavily on an increasing number of students and their families. Warner proposed several worthwhile reforms, but they are modest ones. The same is true of the proposal by Kirk Cox, the Republican majority leader in the House of Delegates, to cap student activity fees. That too is a worthwhile idea, but it also nibbles at the real problem instead of tackling it head-on.

That problem is obvious: During the past few decades the price of a college education has grown more than four times faster than the consumer price index. According to a recent piece in The Wall Street Journal, a typical family in 1970 had to spend 16 percent of its annual income for a private college's four-year tuition. Today that same family would have to pay 36 percent of its income for the same product. In the past five years alone, tuition has risen 10 percent at private colleges—and 17 percent at public ones.

The public-policy prescription for this trend has been to throw more money at the problem, in the form of student aid. This is lunacy. It does nothing but encourage colleges and universities to charge even more, secure in the knowledge that student aid will rise to keep up.

And indeed it has. Student loan debt exceeds $1 trillion. Many institutions now offer scholarships and grants not only for low-income applicants but also for middle-class and even upper-middle-class families. Harvard has a program for families making up to $150,000. So does California—the Middle Class Scholarship Program—which pays for as much as 40 percent of the cost of attending a public university for families making that much. Washington & Lee University in Lexington has an aid program for families earning up to $75,000.

And remember: All of this student aid comes in addition to the already substantial subsidies that public colleges and universities receive from the taxpayers through direct appropriations. You often hear leaders of higher education complain that their appropriations were cut during the Great Recession. For many, the claim is misleading: Their year-over-year appropriations actually rose, but their per-student funding declined because they chose to admit more students. That's what happened in Virginia, where state appropriations for higher-ed operating costs rose from $3.5 billion a decade ago to $7.5 billion today (and thousands of jobs were added to the higher-ed payroll). In any event, even when the complaint about funding cuts is accurate, it ignores a key point: whether the earlier appropriations could be justified in the first place.

The massive infusion of money through student aid and other avenues carries with it no incentive to control costs or seek out efficiencies. Little wonder, then, that most colleges and universities squander their resources. For example: Between 1989 and 2010, the share of full-time faculty members who reported spending at least nine hours per week in the classroom fell from 60 percent to 44 percent. (Not 40 hours a week, or even 20—nine.) Here in Virginia, the State Council of Higher Education says a dozen institutions are falling short of the benchmark for efficient use of their buildings (classrooms are supposed to be used 40 hours a week, and labs 24). And it's hard to believe any amount of efficiency could justify $96,000, which is the cost per bed of two new dorm buildings at VCU.

Meanwhile, administrative costs have skyrocketed; the growth in support personnel has far outstripped the growth in instructional staff. Some of that is due to the natural bureaucratic tendency toward bloat. Some of it is owing to the universities' ideological devotion to identity politics and their attempts to appease the grievance industry by creating new offices and departments.

As a result, many colleges and universities now resemble the University of Virginia—which has a six-person Office for Diversity and Equity, a six-person Office of African-American Affairs, a Center for Diversity in Engineering, an Office of Graduate Student Diversity Programs, an associate dean of diversity for the medical school (not to mention a director of diversity initiatives for the same medical school), a program coordinator for Asian/Asian Pacific American programs, a program coordinator for Hispanic/Latino, Native American, and Middle Eastern Student Services ("Office Hours: 2-3 pm Tues, Wed"), a coordinator for LGBTQ student services, and so on. Kindly note that these offices do not exist to prevent discrimination in higher education—multiple federal laws, enforced by the Department of Education's Office of Civil Rights, already do that.

Trying to address spiraling college costs by increasing student aid is like trying to put out a fire by dousing it with gasoline. The way to cut the cost of college is to cut college spending—by making colleges trim their administrative fat, require more work from their personnel and close those offices and departments—including a majority of money-sucking athletic programs—that do not pull their own weight.

Colleges, of course, will scream bloody murder. Let them. At some point, the gravy train has to come to a stop.