The former Florida governor has an impressive conservative record. 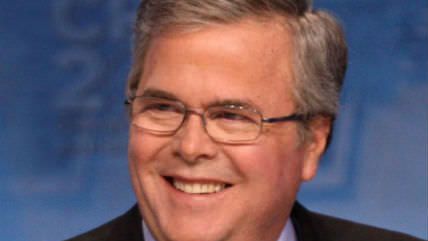 That's the main point I took away from a weekend reading Conservative Hurricane: How Jeb Bush Remade Florida, by Matthew T. Corrigan. Professor Corrigan's book, issued last year by the University Press of Florida, is attracting new attention from Democratic opposition researchers wondering what they may be up against in 2016 and from Republicans curious about the new high-profile figure on the list of likely 2016 presidential candidates.

Anyone laboring under the misimpression that the former governor of Florida is some kind of mushy moderate will get a bracing reality check from Conservative Hurricane, which credits (or blames, depending on where you sit) Bush for turning Florida into "an executive-driven conservative public-policy showcase."

On economic policy, Bush turned Florida, which already had no state income tax, into an even lower-tax state by implementing what Professor Corrigan describes as "the largest tax cut in Florida's history," a reduction of about $20 billion. Tort reform capped punitive damages for businesses. He privatized the state government's personnel department, its child protective services, its prison food services, its Medicaid program, and its defense of death-row inmates.

He created two "faith-based prisons" over the objections of the American Civil Liberties Union. By executive order, he eliminated race and gender-based affirmative action in public college admissions and in state contracting, denouncing a sit-in protest by two black lawmakers as "childish."

Philosophically, as Corrigan describes it, Bush saw big government as eroding character and virtue. Bush is certainly no pure libertarian; among other things, he approved half a billion in state and local incentives to lure the non-profit Scripps Research Institute to Palm Beach County from California. While Bush used his line item veto to block hundreds of millions in spending approved by his Republican legislature, the state budget overall did increase on his watch to about $74 billion from about $49 billion, according to Corrigan. Some of that increase was hurricane relief and Medicaid, partially reimbursed by the federal government, and it also came at a time when the value of the dollar was declining relative to gold.

Bush's record shows he believes in an activist role for the elected leader in pursuing conservative policy goals. But the bottom line is that whatever Bush's supposed recent heresies are on the Common Core, immigration, or tax increases, his record as governor shows doesn't exactly mark him as any sort of moderate milquetoast.

Professor Corrigan, who teaches political science and public administration at the University of North Florida, delivers a sometimes critical but nonetheless admiring portrait of Bush's record as governor from 1999 to 2007. It's an account whose general direction is confirmed by a recent dispatch in a Florida newspaper, which observed, "the way Bush is viewed now does not always jibe with his record as governor. For example, criticism from Tea Party conservatives that Bush is too moderate is at odds with those who remember him as one of Florida's most conservative governors, cutting taxes for the wealthy, embracing anti-abortion and gun-rights legislation, privatizing state services, battling teachers' unions and expanding school vouchers."

Some people may find that record attractive. Others may find it repellant. But anyone trying to make sense of presidential candidate Jeb Bush will in the end have to reckon with the reality of his Florida record, which, like it or hate it, is one of concrete and substantive accomplishments.