The Case for Conservative Realism

Americans want strength and leadership but that doesn't mean they see war as the only solution. 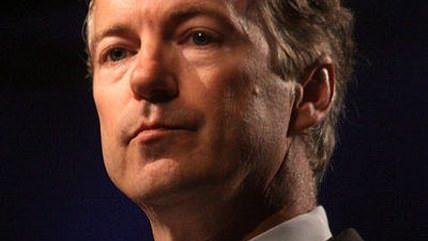 The following is an edited excerpt from an address that Sen. Rand Paul gave in front of the Center for National Interest on October 23. You can read the whole speech at reason.com.

Americans want strength and leadership but that doesn't mean they see war as the only solution. Ronald Reagan had it right when he spoke to potential adversaries: "Our reluctance for conflict should not be misjudged as a failure of will."

The war on terror is not over, and America cannot disengage from the world. To contain and ultimately defeat radical Islam, America must have confidence in our constitutional republic, our leadership, and our values. To defend our country we must understand that a hatred of our values exists and acknowledge that interventions in foreign countries may well exacerbate this hatred, but ultimately, we must be willing and able to defend our country and our interests. As Reagan said: "When action is required to preserve our national security, we will act."

Will they hate us less if we are less present? Perhaps. But hatred for those outside the circle of "accepted" Islam exists above and beyond our history of intervention overseas.

The world does not have an Islam problem. The world has a dignity problem, with millions of men and women across the Middle East being treated as chattel by their own governments. Many of these same governments have been chronic recipients of our aid.

When the anger boils over, as it did in Cairo, the anger is directed not only against Mubarak but also against the United States because of our support for Mubarak. Some anger is blowback, but some anger originates in an aberrant and intolerant distortion of religion that wages war against all infidels. We can't be sentimental about neutralizing that threat, but we also can't be blind to the fact that drone strikes that inadvertently kill civilians may create more jihadists than we eliminate.

The truth is, you can't solve a dignity problem with military force. It was Sec. Robert Gates who warned that our foreign policy has become over-militarized. Yes, we need a hammer ready, but not every civil war is a nail.

I support a strategy of air strikes against ISIS. Our airpower must be used to rebalance the tactical situation in favor of the Kurds and Iraqis and to defend Americans and our assets in the region. Just as we should have defended our consulate in Benghazi, so too we must defend our consulate in Erbil and our embassy in Baghdad.

I don't support arming the so-called Sunni moderates in Syria, though. I said a year ago and I say it again now: The ultimate sad irony is that we are forced to fight against the very weapons we send to Syrian rebels. The weapons are either indiscriminately given to "less than moderate rebels" or simply taken from moderates by ISIS. Six hundred tons of weapons have been given to the Syrian rebels, inadvertently creating a safe haven for ISIS.

Although I support the call for defeating and destroying ISIS, I doubt that a decisive victory is possible in the short term, even with the participation of the Kurds, the Iraqi government, and other moderate Arab states. In the end, only the people of the region can destroy ISIS. In the end, the long war will end only when civilized Islam steps up to defeat this barbaric aberration.

This brings me to the last principle I'd like to discuss today: we are only as strong as our economy. Admiral Mike Mullen, then the chairman of the Joint Chiefs of Staff, put it succinctly: the biggest threat to our national security is our debt. A bankrupt nation doesn't project power but rather weakness.

Our national power is a function of the national economy. During the Reagan renaissance, our strength in the world reflected our successful economy.

Low growth, high unemployment, and big deficits have undercut our influence in the world. Americans have suffered real consequences from a weak economy.

Free trade and technology should be the greatest carrot of our statecraft. Promoting free markets should be a priority. The only long-term strategy that will change the world is fostering successful capitalist economies that increase living standards and connect people through trade.

Rand Paul is a U.S. senator from Kentucky.