LAPD to Get Body Cameras. Will They Tamper with Those, Too? 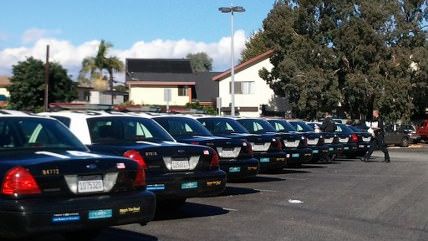 The big news coming out of Los Angeles (besides the rain) is that the city is going to buy 7,000 body cameras to outfit all its police officers. From the Los Angeles Times:

Advocates say the cameras will be a valuable tool for the department. The ability to record audio and video of police encounters with the public, they say, could help guard against officer misconduct and clear cops falsely accused of wrongdoing.

Steve Soboroff, president of the Police Commission, has spent months raising private money to outfit officers with on-body cameras. He said the mayor's plan would supplement the contract the LAPD was already negotiating with the camera vendor, eventually bringing more cameras to officers on the streets.

I'm a bit fascinated by the idea that they raised money for the cameras from private donations, but I'm reluctant to try to guess what it may mean without knowing who the donors were.

LA Weekly notes that one of the police unions is supporting the cameras, on the condition that officers will be able to review the video before writing up reports, which has got the American Civil Liberties Union saying, "Um, no":

"That would be a ridiculous policy," argues Peter Bibring, an ACLU attorney.

Bibring argues that allowing officers to review the videos beforehand could taint their recollections, or make it easier to lie.

Then there's the matter of whether officers will tamper with the cameras. Earlier in the year, the Los Angeles Police Department discovered that officers were tampering with their dash cameras to keep from being recorded. Again from the Los Angeles Times in April:

An inspection by Los Angeles Police Department investigators found about half of the estimated 80 cars in one South L.A. patrol division were missing antennas, which help capture what officers say in the field. The antennas in at least 10 more cars in nearby divisions had also been removed.

LAPD Chief Charlie Beck and other top officials learned of the problem last summer but chose not to investigate which officers were responsible. Rather, the officials issued warnings against continued meddling and put checks in place to account for antennas at the start and end of each patrol shift.

So I'll end in a reminder that body cameras themselves aren't a solution, but rather an extremely useful tool to increase transparency and lead to more accountability. But they won't work if police find ways to avoid the transparency, nor if they are shielded from accountability in situations where they are caught engaging in misconduct.