Immigrant Sex Workers Say They're Victimized by NYPD, Not Traffickers 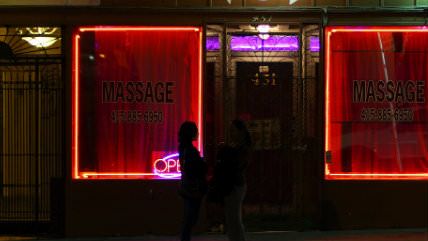 For the second time since September, The New York Times profiles one of the state's specialized criminal courts created to handle prostitution cases, known as "human trafficking intervention courts." This one, in Queens, sees largely Latin American and Asian defendants, including a large number of undocumented immigrants. Many turned to sex work with debt piling up and few other employment options.

This is, of course, precisely the cohort that elicits the most concern. All those American-born sex workers on Twitter may insist they want "rights, not rescue," but surely these low-income, low-skill women are victims. Surely they'll appreciate state power being used to help rend them from their wretched lives.

Yeah, no. The women the Times talked to "often don't define themselves as having been trafficked."

On several Fridays, nearly a dozen women said during interviews in Mandarin that they did not feel like trafficking victims, but victims of the police.

While some appreciated the social services they were connected to through the court, they didn't appreciate the arrest and court dates required to get there. "We're still arresting them at a very rapid pace," Leigh Latimer, a Legal Aid Society lawyer assigned to the court, told the Times. "We're trying to solve their problems through being arrested, which is not an affirming process."

So far in 2014, Queens has seen 686 arrests for misdemeanor prostitution and loitering charges. (In contrast, it's seen only 15 cases against traffickers.)

Sex workers who go through the New York's Human Trafficking Intervention Courts can opt for a series of counseling sessions in lieu of jail time. If they remain out of trouble for six months, the charge will be wiped from their records. While this is certainly better than giving everyone jail time and criminal records, nearly 40 percent of cases in the past year did not end in counseling but traditional prostitution punishments.

"The women who accept the court's deal attend full-day group counseling sessions once a week," the Times notes. One can't imagine it's financially easy for low-income women—whether working in sex work or whatever—to lose a full day's pay once a week for six weeks or to arrange for this time off from work or child care. But at least they may learn some useful skills to help them start earning money in a post-prostitution life right?

… they often begin the day with yoga, and then learn about the court process, their rights and prostitution law.

Let them eat yoga, darlings! Who needs to earn a living when you have good intentions on your side?