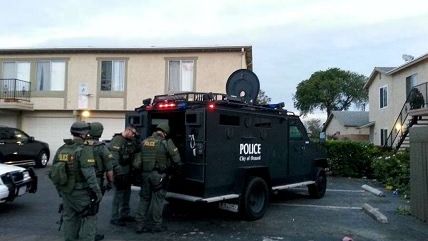 The Salinas family in Oxnard, California, filed a federal lawsuit against the city and its police department for a raid in April in which they say police threw a smoke bomb into a room with a 2-year-old in it despite the mother and the child's older siblings warning police there was a 2-year-old was in the room.

The raid was part of a three-city operation targeting gang-related crime* in which the Oxnard Police Department, the Ventura County Sheriff's Office, the Ventura County District Attorney's office, and the FBI participated. Oxnard police would not say whether the raid on the Salinas family was on the wrong house, but Courthouse News Service reports one of the suspects in Oxnard had previously lived at the Salinas address, before the family moved there four months ago.

Courthouse News Service relays how the lawsuit described the start of the raid:

The Salinas family says they were sleeping on April 16, around 4 a.m., when they were awakened by scuffling footsteps and vehicles outside their condominium. When Jose Salinas drew the curtains of his bedroom window, he saw the barrel of a policeman's gun pointed at him.

Police broke the front windows of the home and set off three smoke bombs. Police then crashed through the front door with guns drawn, yelling, "Get down and put your hands to your head!"

With laser guns pointed at them, Paulina and Jose Salinas were handcuffed and put to their knees. Their 10-year-old daughter and 6-year-old son were shoved into a corner.

That's when cops went for the 2-year-old. According to the suit, the boy's foot was injured by shrapnel, suffering first-degree burns, and the family was detained for four hours. Police said after the raid that the boy was taken to a hospital, treated, and released. The department won't comment now, not even to confirm a wrong-door raid, because of the ongoing suit.

*Four people were arrested, on various charges of: being under the influence of a controlled substance, being a felon in possession of ammunition, an unspecified parole violation, two misdeamanor and one felony warrant, felony vandalism (tagging). The last was alleged as a crime "committed for the benefit of a criminal street gang."