How a Republican Congress Can Kill Common Core

Opponents and supporters of national standards in education both want the federal government to back off. 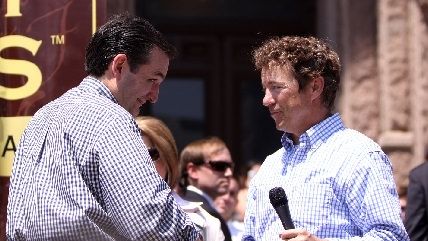 Republicans have retaken control of Congress on a promise to reverse President Barack Obama's failed policies. They should start by honing in on an initiative now synonymous with federal overreach and creeping nationalization of local education matters: the new Common Core national curriculum standards, which give parents everywhere nightmares about their kids' trendy, incomprehensible math homework assignments.

The GOP should tell Obama to back off and stop forcing the standards down the throats of various state legislatures. In doing so, Republicans would draw praise from Common Core's many critics—including conservatives and libertarians, parents, and even teachers—but also some of its most devout proponents, who believe federal involvement has resulted in nothing but bad PR for the initiative.

While Common Core has become conflated with federal education policy, the truth is that the initiative started out as a project of the National Governors Association and school administrators. The idea was to offer uniform curriculum standards to states that wanted to opt in.

Unfortunately, the Obama administration liked the idea so much that it began awarding significant perks to Core-aligned states. Signing on to Common Core meant a waiver from onerous federal No Child Left Behind (NCLB) requirements and a chance at Race to the Top grant money. After being offered what were essentially lucrative bribes, some 45 states signed onto Common Core between 2010 and 2012.

The situation infuriated libertarian and conservative critics of nationalized education policy. It's also made strange bedfellows of limited government folks and public school teachers, who generally support the idea of a standard curriculum but hate the rigorous, ceaseless standardized tests required by Common Core.

It's easy to see why the standards have everyone up in arms: Kids in New York City, Los Angeles, and everywhere in between are being forced to take exams aligned to new, unproven standards. Implementation is expensive—Common Core demands new textbooks and fancy technology—and some districts are still using the the old curriculum with the news tests, or vice versa. Since Common Core upends the customary order in which a student learns new concepts (high school algebra, geometry, and trigonometry are rearranged, for example), misalignment is a serious problem when exam time comes. The situation is a nightmare for parents who struggle night after night to help their kids' navigate Byzantine Common Core jargon.

Voters have had enough. Last week, they gave their support to several explicitly anti-Core candidates for local and statewide races. They also elected a new Republican majority to the U.S. Senate. Many of that body's highest profile legislators and presidential aspirants—including Rand Paul, Ted Cruz, and Marco Rubio—have talked about stopping the madness.

It's time for push to get acquainted with shove. Congress should take Obama out of the Common Core equation entirely. Here's how: Legislators could approve an amendment to the federal education law that specifically prohibits waivers. Deprive federal bureaucrats of the power to bribe local lawmakers into remaining Core compliant, and many states would presumably drop out.

McCluskey believes such waivers are already illegal, but prompt legislation could ensure that the matter is clarified long before the Supreme Court weighs in on the Obama administration's similarly dubious Obamacare waivers.

"Should House Republicans prevail in their lawsuit against Obamacare waivers, the administration might back off of NCLB waivers on their own if pressed," says McCluskey. "But there are a lot of 'ifs' there."

It's true, Obama could always veto legislation restricting his NCLB waiver powers. But he would risk alienating the remarkably bipartisan anti-Common Core coalition, which includes many teachers who are otherwise supportive of liberal Democratic programs. Teachers took a beating in the elections last week—Republican governors took them on and won in state after state—and the only good news for them was that an empowered Republican majority is largely on their side when it comes to Common Core. Will Obama really deny them that small victory in order to protect an initiative he has no business pushing?

Given how enthusiastic the president is about federal power in general, the answer may very well be emphatically, yes. But that would be a shame, said Michael Petrilli, president of the Thomas B. Fordham Institute.

Fordham is a conservative education think tank that supports Common Core. Its researchers believe that on balance, the standards will improve education outcomes in most states.

Still, Petrilli opposes federal involvement. The president's actions have legitimized conservative fears about a federal takeover of education, and the best thing for the standards would be to allow them to succeed or fail in the states on their own merits—absent federal pressure to align, he said.

If Congressional Republicans pick a fight with Obama over Common Core and federal coercion, they will have everyone on their side—except the president. That sounds like a fight well worth having.

Millions of frustrated parents would thank them for it.