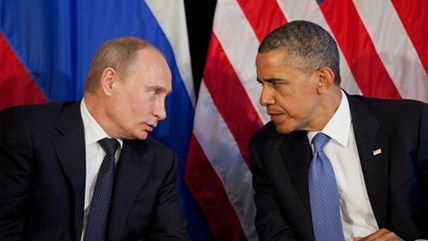 Although a two-month ceasefire is still technically in place, Russia's invasive ground war in Ukraine is escalating. The United States has some stern words for Vladimir Putin over this incursion.

We are very concerned by intensified fighting in eastern Ukraine, as well as numerous reports, including from the Special Monitoring Mission of the Organization for Security and Cooperation in Europe (OSCE), that Russian backed and supplied separatists are moving large convoys of heavy weapons and tanks to the front lines of the conflict. We continue to call on all sides to strictly adhere to the cease-fire. Any attempt by separatist forces to seize additional territory in eastern Ukraine would be a blatant violation of the Minsk agreements. We reiterate our call on the Russian Federation to honor all of the commitments it made in Minsk, including ending its military supply to the separatists and the withdrawal of all of its troops and weapons from Ukraine. Furthermore, Russia must enable the restoration of Ukrainian sovereignty along the Ukrainian side of the international border, to be monitored by the OSCE, and facilitate the release of all hostages. We continue to stress that adherence to the framework agreed upon in Minsk is the best chance of achieving a peaceful resolution to the conflict in eastern Ukraine.

Secretary of State John Kerry had an unofficial meeting with Russian Foreign Minister Sergei Lavrov this weekend at the Asia-Pacific Cooperation summit in Beijing. It appears Russia, which continues to deny any involvement in the war despite enormous evidence to the contrary, has the upper-hand and is framing the debate. "If Washington is interested in contributing to the reconciliation of the situation and creating dialogue between Kiev and the rebel leadership… I think that would be a step in the right direction," said Lavrov.

Kerry stated, "We do have some disagreements about some of the facts on the ground with respect to Ukraine. We have agreed to exchange some information between us regarding that. We have also agreed this is a dialogue between us that will continue."

President Barack Obama and Putin are supposed to have an unofficial meeting at the summit, too.

Radio Free Europe reports that this weekend eastern Ukraine faced "some of the most intense shelling since the cease-fire" began.

Whether Putin can sustain this war is yet to be seen. Russia's central bank is predicting three years of economic stagnation. The nation's currency continues to drop to record lows, and this weekend The Moscow Times reported "rising demand for foreign currency mean[ing] that U.S. dollars and euros were unavailable at some Russian banks and exchange points Friday as the ruble went into free fall during morning trading." Earlier in the year, Russia invaded and annexed Crimea, which "is now Russia's poorest region," and will cost tens of billions of dollars on development.