When Colleges Abolish Due Process in Sex Disputes, Innocent Lives Are Ruined 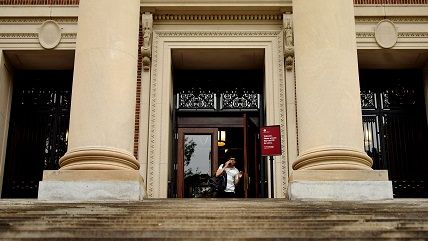 As a victim of Yale University's rush to abandon any pretense of fairness in sexual harassment cases, Patrick Witt has quite a sad tale to tell. The college football player, NFL hopeful, and Rhodes Scholarship candidate lost everything after Yale mishandled an informal sexual harassment accusation against him. Now Witt is a law student at Harvard University and he is worried his new college is equally committed to trampling accused students' due process rights.

Witt recently penned a column for The Boston Globe detailing the travesty of justice that ruined all his plans and put his life on hold. Relevant excerpts:

Harvard's new policies are substantially similar to those already in effect at Yale, my alma mater. While an undergraduate there, my ex-girlfriend filed an informal complaint against me with the then-newly-created University-Wide Committee on Sexual Misconduct. The committee summoned me to appear and styled the meeting as a form of mediation. Its chairman, a professor with no prior experience handling dispute resolution, told me that I could have a faculty adviser present but no lawyer, and instructed me to avoid my accuser, who, by that point, I had neither seen nor spoken to in weeks. The committee imposed an "expectation of confidentiality" on me so as to prevent any form of "retaliation" against my accuser.

I would say more about what the accusation itself entailed if indeed I had such information. Under the informal complaint process, specific accusations are not disclosed to the accused, no fact-finding takes place, and no record is taken of the alleged misconduct. For the committee to issue an informal complaint, an accuser need only bring an accusation that, if substantiated, would constitute a violation of university policy concerning sexual misconduct. The informal "process" begins and ends at the point of accusation; the truth of the claim is immaterial.

When I demanded that fact-finding be done so that I could clear my name, I was told, "There's nothing to clear your name of." When I then requested that a formal complaint be lodged against me — a process that does involve investigation into the facts — I was told that such a course of action was impossible for me to initiate. At any time, however, my accuser retained the right to raise the complaint to a formal level. No matter, the Committee reassured me, the informal complaint did not constitute a disciplinary proceeding and nothing would be attached to my official record at Yale.

Nevertheless, Witt's employer, the Rhodes Trust, The New York Times, and the public at large eventually found out about the accusation. He was disgraced but unable to rectify the matter, since the claim was never investigated or adjudicated in any logical way. Witt's dream of playing in the NFL was crushed, he was forced to withdraw his Rhodes Scholarship candidacy, and his employment ended.

Witt warns that "the destructive power that Yale's and now Harvard's new sexual misconduct policies wield is immense and grossly underestimated." For what it's worth, 28 members of Harvard's law faculty agree—and signed a letter saying so. Sexual harassment and rape are serious issues that demand serious responses. They should not be dealt with by kangaroo courts or extra-legal inquisitions.