Voting Republican Is the Smart Choice for Libertarians

There are liberty GOP candidates on the ballot. Let's not give those up to Democrats by voting Libertarian, says Grover Norquist. 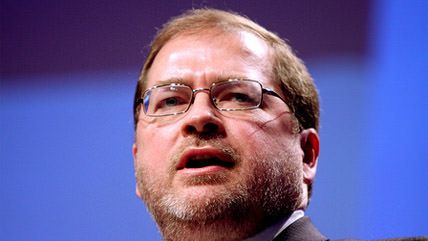 This article is part of a series on the libertarian vote in the 2014 midterm election. Here's the first set of arguments from Democrats, Libertarians, Republicans. Read today's alternative perspectives from the other parties here and here.

You only have one vote. How best to use it to advance liberty?

A libertarian preparing to vote in a House or Senate race this November that features three candidates, a Republican, a Democrat and a Libertarian must make a decision.

Will voting for the Libertarian candidate add one more vote for a losing candidate that may win one or two or five percent of the vote and thereby convince America of the strength of the libertarian movement and the power of its ideas? Will the newscasters announce the libertarian vote and muse on how it grew from one percent to two percent? Maybe.

If the Democrat Senate candidate in North Carolina or Virginia wins by a narrow margin because several hundred or thousands of liberty voters voted for the libertarian third party candidate rather than the Republican Senate candidate how will this be understood by the media and by the national electorate? Will the media announce that the Democrat victories are actually a demonstration of the growing strength of the libertarian movement? Or will they argue the nation voted for big government? What message does your "message" vote send?

Richard Tisei, the gay pro-liberty Republican candidate for the House of Representatives in the 6th congressional district in Massachusetts lost by 3,650 votes in 2012. The libertarian candidate, Dan Fishman, won 16,668 votes. The winner, Democrat John Tierney was a consistent vote for statism for his entire career and the past two years. He just lost his primary to a young self-described "progressive" whom Joe Biden just went to Massachusetts to endorse; fortunately Tisei is running again. This time the Libertarians have decided not to field a candidate; in fact, Fishman is supporting Tisei, who may win this November. What lesson did Massachusetts libertarians learn from 2012?

In 2006, Montana's Republican Senator Conrad Burns lost to his Democrat opponent Tester by 3,562 votes. The Libertarian Candidate Stan Jones captured 10,377 votes. Tester's win meant that Obama had 60 votes in December 2009 and could pass Obamacare. That one vote passed a bill designed to fail into single-payer over time. Did the "too cool for school" libertarians advance liberty when they voted that day?

"But I want to advance liberty as rapidly and as powerfully as possible. Isn't voting for the Libertarian candidate sending a stronger signal that there is a real demand in the electorate for greater liberty than voting for the 'lesser of two evils' Republican?"

Well who is getting this message? When you watch the TV commentators on election night the tally they put up on the board is either, one, Republicans win and the nation wants lower taxes and spending and an end to Obamacare or two, Democrats win the Senate and the nation wants Obama's growing government. We don't get to write the script.

Liberty activists should remember that voting is only one political act. Speaking with your siblings, co-workers, neighbors, children and parents provides daily opportunities to advance liberty and multiply the voice and power of the liberty movement. Call your grandparents. Speak with the waitress. Don't whine that Republican candidates do not talk about liberty. You talk about liberty to everyone who will listen. Whining about other people is not work. It is whining. The struggle against statism is a great deal of work and the only person you control is you. Be the calm, coherent voice for liberty you wish the Republican candidate for Senate was.

Hollywood producer Sam Goldwyn used to tell writers, "If you want to send a message, use Western Union." Not every political message had to be jammed into "his" movie. Liberty activists know that the Internet now allows us to share tweets, Instagram pics, Facebook posts, simple e-mails, and whatever was invented last week and I haven't heard of yet.

I would argue that if the election is close or might be close the smart move is to vote for the Republican. The corollary of that is that if a particular election is not close—and every election day has a number of elections at the same time (congress, Senate, state legislature, governor, mayor)—then "send a signal" with a vote for the Libertarian. And if you are a potential libertarian candidate, organize your campaigns so that you can honestly look any liberty voter in the eye and accurately assert that there is no opportunity cost of casting a "message" vote for you on this particular ballot this year.