Republicans don't live up to their tax reform claims, while Democrats pave the way for tech innovation, says Jared Polis. 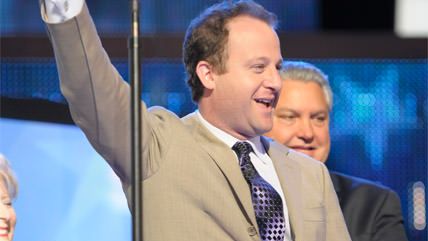 This article is part of a series on the libertarian vote in the 2014 midterm election. Here's the first set of arguments from Democrats, Libertarians, Republicans. Read today's alternative perspectives from the other parties here and here.

Libertarian-inclined voters often have to make a difficult choice. Candidates on the Libertarian Party line rarely have a chance to win, leaving Libertarian-inclined voters to choose between the two major parties if they want to vote for a viable candidate. It's undoubtedly frustrating, but voting is our best check on government, and our individual responsibility in a democracy, so staying home on Election Day is certainly not the answer.

I believe that libertarians should vote for Democratic candidates, particularly as our Democratic nominees are increasingly more supportive of individual liberty and freedom than Republicans. When I am working in Congress to expand and enhance our freedoms like stopping the Drug Enforcement Administration from enforcing anti-marijuana laws in states where it is legal, removing the authority of the National Security Agency to engage in mass surveillance, and keeping the government out of our private lives, I can count on most of the Democrats to support me. And while there are a few libertarian minded Republicans like Rep. Justin Amash (R-MI), who are willing to stand up to their party's leadership, the vast majority of Republicans in Congress vote lockstep against these measures time and time again.

Over the past several decades, the Republican Party has simply lost many of the values that once attracted libertarians voters to them. They don't believe that individuals should be able to make their own decisions about their bodies, whether it be a woman's right to choose, or your ability to responsibly use marijuana. They want to decrease, or in many cases, eliminate the separation of church and state. And, perhaps most disturbing, they want the government to have the ability to engage in warrantless wiretapping and mass surveillance.

On tax reform, where are the so-called tax breaks that Republicans like to brag about delivering? As Democrats have tried time and time again to close corporate loopholes, and reduce tax rates for middle-class Americans, Republicans have shown that they care more about protecting their corporate donors, than reforming our tax code. Even when Chairman Dave Camp (R-MI) came up with a sensible proposal to reduce the corporate rate from 35 to 25 percent by eliminating special interest tax expenditures, it fell on deaf ears in Republican leadership, so beholden to special interests are they. And in terms of overall spending, remember it was the neo-cons, so strong in Republican circles, who got us into the Iraq war and the expenditure of close to a trillion dollars of your money, far more than any Democratic priorities have cost.

Democrats are almost always the first to embrace new, disruptive technologies and innovations. More than that, we tend to understand them better and know how to craft effective policies to embrace them, not ban or regulate them. When Texas Republican Lamar Smith introduced Stop Online Piracy Act (SOPA), legislation that would have severely restricted innovation and free speech, I vehemently fought it, joined by many other Democrats, including our Leader Nancy Pelosi. Only a handful of libertarian minded Republicans can say the same thing.

Sure, no party or candidate will be perfect; you probably disagree with other Libertarians on many issues, but of the major political parties, the Democrats have become the party of individual freedoms. This election season, I urge you to take a real hard look at the candidates. Look at the track record of Democrats and Republicans in Congress. Who is actually trying to reduce the impact of government on our daily lives? Who will prevent government censorship of the internet? Which candidate will let you marry who you love? Who will let you have control of your reproductive health choices? Who will spend our hard earned tax dollars increasing military spending, even on projects the military has said they don't want!

When you step back and look at where the Republican Party has drifted over the years, and how well the Democrats have stepped in to represent individual freedom, your choice should be clear. This year, give the Democrats a shot.