Police Abuse Even a Threat for Backyard Chickens Now 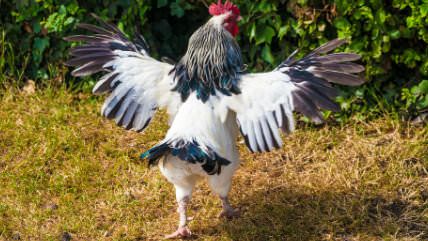 Why did the chicken cross the road? Perhaps to get away from psychopathic cops. It seems that police brutality has even come to the chicken coop these days.

Last month, the police chief of Atwater, Minnesota, responded to complaints about a family's pet chickens by beating and beheading one of them with a shovel. Outraged Atwater residents gathered this week to address the situation—by demanding that the tiny rural community continue to criminalize keeping chickens and ducks.

Right now, keeping these animals is a misdemanor offense in Atwater, according to Fox Minneapolis-St. Paul. It also seems the brutal execution of your animals is fair game; Chief Trevor Berger insisted he killed the chicken out of concerns for public health.

At a city council meeting Wednesday, "it was clear that even the suggestion of changing the ordinance to allow chickens to move in has a lot residents clucking their tongues," Fox reports. This despite the fact that the change city council was considering would still have required any would-be chicken keepers to get permission from neighbors, obtain a city permit, and follow an array of other rules. I guess this is just to remind you that there are actually people who find keeping chickens and ducks on your own fenced-in, small-town property—with the permission of neighbors—more objectionable than cops decapitating a little boy's chicken with a shovel.