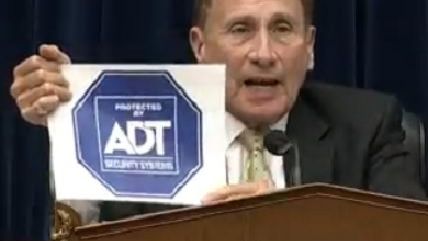 Last week, an Iraq war veteran jumped the White House fence armed with a knife and got all the way into the East Room before agents apprehended him. At first, the Secret Service claimed the man, Omar Gonzales, had only gotten just inside the White House. That was a lie, turning what might've been an odd story forgotten by next week into an indicator of bigger problems at the Secret Service.

The Secret Service's controversial recent history—arguing with prostitutes in Colombia, getting drunk in Holland, and missing things like party crashers and gunfire—means the incident became a reason to hold hearings in Congress about the Secret Service. This morning, the director of the Secret Service, Julia Pierson, appeared before the House Committee on Oversight and Government Reform.

And while the Secret Service's recent history of mishaps was brought up throughout the hearing, several members of Congress, both Democrat and Republican, appeared more interested in demanding the Secret Service use more force in situations like last week's fence jumper. This even though the president and his family weren't at the White House that day, something the Secret Service knew when responding but Gonzales probably didn't.

Rep. Stephen Lynch (D-Mass.), for example, insisted the Secret Service should've arrested Gonzales the first time he showed up outside the White House with a hatchet—something Pierson stressed was not illegal. She also stressed that Gonzales was cooperative with authorities at the time.

No matter. Rep. Jason Chaffetz (R-Utah) said he and his fellow members of Congress "want to see overwhelming force" in a situation like the fence jump, saying he would defend the lethal use of force. Remember, President Obama and his family were not at the White House when the fence was jumped, so there was no threat to the president during this incident.

Although Pierson promised something like this would "never happen again" (an impossible guarantee to make no matter the vigilance exercised) and said she took full responsibility, it's a big old case of "nothing else happens." Although Pierson acknowledged a failure during the fence jumping incident (debatable: again, the Obamas were not at the White House and the Secret Service agents involved apparently did not feel threatened), she didn't announce any concrete disciplinary measures because of the failure. She did manage, at one point, to blame "funding constraints."