Farmer Joel Salatin: 'We Would Be a Much Healthier Culture if the Government Had Never Told Us How to Eat'

"One of the most rebellious things we can do in our culture now is to spend time in our kitchen," says Salatin. 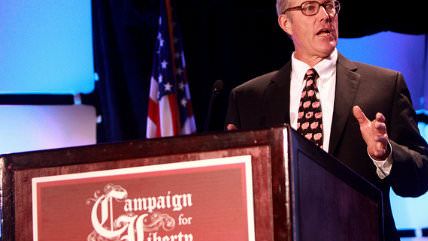 One of the themes noticeable at this weekend's Liberty Political Action Conference (LPAC) was libertarianism's messaging problem, so to speak. Perhaps this is always a theme at LPAC, I don't know (this was my first rodeo), but it was present with a palpable frustration that I think speaks to fresh wounds. It's been an election cycle where demonizing the Koch brothers has become a major campaign strategy for Democrats and demonizing libertarians has become a major editorial strategy for Salon. It's been a summer where we watched with excitement while folks started actually paying attention to police militarization and abuse—and then nonsensically accused libertarians of staying silent on the issue out of racism. It's been a constant stream of wild and weird allegations of oligarchy-loving, minority-hating, sex-negative, environment-poisoning indifference to poverty.

Joel Salatin—farmer, author, activist, provocateur—seemed especially fed up as he spoke at the 2014 LPAC conference Friday. Salatin is a self-described libertarian who gets cited approvingly by the Michael Pollan types of the world because he preaches the gospel of small-scale, pesticide-free farming and home-cooked meals. (Salatin also labels himself an environmentalist, capitalist, Christian, and lunatic.) He was featured in the documentary Food, Inc. and is prone to saying things like this from Friday's speech: "I think that one of the most rebellious things we can do in our culture now is to spend time in our kitchen."

"In (the libertarian) movement, we're accused a lot of being elitists," Salatin told the LPAC audience. It's a charge he also hears about healthy-eating evangelists such as himself. But "the real elitists" are the people who say "we need to tell Americans what to eat."

"We would be a much healthier culture if the government had never told us how to eat," he suggested, bringing up the U.S. Food Pyramid—an advice module that's fallen far, far on the wrong side of nutritional history. "These elitists thought the country was too stupid to know how to eat, how to feed their kids."

In his view, the elitists are also "the ones who want subsidies in the farm program," who "run around telling us that backyard chickens are hazardous", look to "factory farms as the answer", say you can't "build a pond on your farm, that's water hoarding", think farming is only "for those kind of people," deny people the ability to operate stills and grow hemp, and zone people out of running businesses from their own homes or land. The elitists are "the Republicans who want to be in bed with Monsanto" and "the Democrats who want to govern every morsel of food we put in our mouths."

We hear "you (libertarians) don't care about food deserts," said Salatin, but it's just that we see different solutions than many on the left:

The anwer to the urban poverty and hunger situation is not government programs and food banks, the answer is all those vacant lots in all the parts of the city… (food) that can then be taken by the neighbors into their own kitchens… They turn that into quiche and pot pies and heavy stews, and sell it in the neighborhood, and they satisfy their hunger from the inside out, not the outside in.

The elitist, Salatin continued, "is the one who promotes a cultural system where if such a thing were to happen, within five minutes five bureaucrats would be knocking on the door" asking about permits and whether the food was made in a certified commercial kitchen. "The elitists are the ones who want to preclude entrepreneurialism (and instead) have somebody come in and protect all these poor people who don't know anything."

"The liberty movement should have taken…a moral high-ground," said Salatin, talking about genetically modified organisms being "fundamentally a property rights issue." But the sentiment seemed to run throughout Salatin's LPAC speech. The ability to grow, cook, and access quality food is so much more than just an idealized good of urban yuppies; it's literally what sustains people, families, and communities. And being able to do these things can bring both health and economic benefits.

Food is one product that people always need, yet many are barred from producing it for themselves or selling it to others in their community because of oppressive regulations. When I say that government policies prevent poor people from helping themselves, I don't mean it in some sort of grand, psychological, welfare-kills-work-ethic way. I mean that our government literally bans people in poverty from not just economic opportunities but from feeding one another and themselves.