More Hysteria Over Toy Guns and Non-Guns in Schools 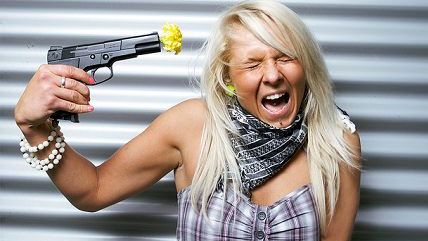 Paranoia about guns in schools continues unabated. From NJ.com:

A day after the council in Atlantic City voted to ban the sale of realistic toy guns, a student in a nearby town was arrested for bringing a fake firearm to school.

The 15-year-old boy was arrested Wednesday at Mainland High School after school officials got word there was an object resembling a gun in his backpack, according to a report on PressofAtlanticCity.com.

The boy, a resident of Somers Point, was charged with possession of an imitation firearm in an educational setting, the report said.

The news story doesn't explain why the toy was brought to school or how administrators discovered that it was tucked away in a backpack. If the teen intended to scare someone with it, then obviously he should be punished. But these rule violations are often just accidents: a matter of forgetting to put away a toy before heading off to school in the morning. It seems awfully cruel to charge a 15-year-old with a crime for inadvertent behavior that harmed no one—especially if he did the right thing by telling a teacher about it.

Here's another story that illustrates just how paranoid schools are about guns. From The Tennessean:

A student reported that another student possibly had a gun, which turned out to be prop for the drama department, said Tullahoma City Schools Superintendent Dan Lawson. …

Tullahoma High School's lockdown this afternoon has been lifted after police determined that a report that a student had brought a handgun to school was not true.

At least nobody is going to jail over this mistake, but still: Stop the madness! Despite the incessant headlines implying the contrary, school shootings are not becoming vastly more frequent (and zero tolerance punishments for accidental breaches of weapons policies wouldn't combat them, even if they were).