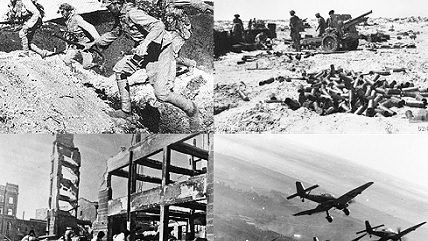 This is a sad day for all of us, and to none is it sadder than to me. Everything that I have worked for, everything that I have believed in during my public life, has crashed into ruins. There is only one thing left for me to do: That is, to devote what strength and powers I have to forwarding the victory of the cause for which we have to sacrifice so much… I trust I may live to see the day when Hitlerism has been destroyed and a liberated Europe has been re-established.

Watch his declaration of war:

At this point, Germany had already incorporated Austria and seized key military defense positions from Czechoslovakia.

Two weeks after Britain's and France's declarations, the Soviet Union, which had made secret agreements with Germany, invaded Poland.

The United States was very hesitant to join the Britain. Congress passed legislation to ensure neutrality, and even in 1940, as many as 80 percent of Americans polled opposed intervention. Not until December 8, 1941, the day after the Pearl Harbor attack did President Franklin Roosevelt declare war on Japan. Three days later, Roosevelt declared war on Germany and Italy. The latter two received unanimous approval from the House and Senate. The declaration against Japan was opposed only by pacifist Republican Jeannette Rankin, the first woman elected to Congress. Not since has the United States formally declared war before engaging in military action.