Ferguson Police Chief Says No Dashcams in Cop Cars, Body Suits Not in Use Yet—Riots Continue 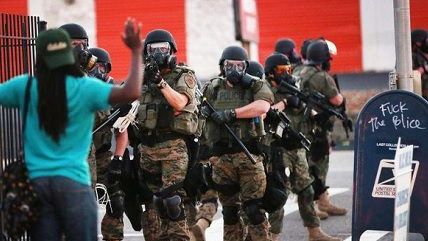 Rioting in Ferguson, Missouri continued a second night after the fatal police shooting of Michael Brown,  an unarmed 18-year-old shot by police. Cops claim Brown was attempting to grab a gun from a cop before he was shot. Witnesses say Brown had his hands in the air when cops shot him.

The Ferguson Police Department reportedly has body cameras for its cops, so it shouldn't be difficult to get to the truth. Except, according to police, they haven't started using the body cameras they purchased yet, while Ferguson squad cars aren't (!) equipped with dashcams. Via Fox News:

Ferguson Police Chief Tom Jackson told KSDK-TV that there's no video footage of the shooting from the apartment complex or from any police cruiser dashboard cameras or body-worn cameras that the department recently bought but has not yet put to use.

Despite the rioting, a response to what looks a lot like a cold-blooded killing by cops, crime in Ferguson has been declining for the last decade and a half, approaching the national average. At the same time, while blacks make up two-thirds of the population, they are twice as likely to be stopped by police as whites, 80 percent of stops are of black residents, and they account for 93 percent of arrests and 92 percent of searches. This despite cops finding contraband on 34 percent of whites stopped but only 22 percent of blacks, according to a racial profiling report from the Missouri's attorney general last year.

Last night riot police used tear gas and rubber bullets to disperse protesters, claiming some had thrown rocks at them. Police barricaded main throughways in the area, such as I-270*. There were also reports on Twitter of police confiscating cameras, although there a lot of photos of last night's events as well. The FBI has announced it is investigating the incident, which some community leaders hope will return calm. More protests are scheduled for today—the police officer who shot and killed Brown has not been identified yet, cops have not explained why Brown was in their police car in the first place, something they claim happened, and there have been no charges or arrests related to the Saturday afternoon incident at all.

Brown's family, in the meantime, has hired Benjamin Crump, who represented the family of Trayvon Martin. "I don't want to sugar coat it," the attorney said, the teenager "was executed in broad daylight." Brown's parents have condemned the looting that has accompanied some of the protests, saying such behavior also has the effect of pushing their son out of the picture. Ferguson's mayor, James Knowles, blamed a "small group of people" (the cops??) for "creating a huge mess," saying the rioting was "only hurting our community." In some other political cultures, Knowles and other city leaders might be expected and obligated to resign in a show of disgrace, contrition, and an admission that they are, because of their faults and history, unable to fix the problem. Instead look for them to keep blaming the residents that are growing tired of being victims of local police.

*I misread an account sent to us by a local resident. The streets surrounding a QT convenience store that was burned down where shot down, including at the intersection of Chambers Road and West Florrisant, about a mile south of I-270 and half a mile from the convenience store. Sorry for the confusion.