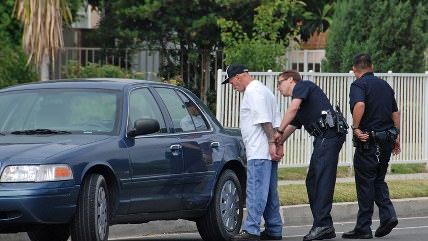 The liberty-loving Institute for Justice (IJ) has put together a new one-stop shop for info explaining all the terrible problems with and government abuse of civil asset forfeiture laws for you to share with any friends or family who don't quite get it. And there's more to come.

Check out the easy-to-remember endforfeiture.com. Scroll down the site and you'll hit every piece of information you need to illustrate the abuse problems and twisted incentives that come from the government's ability to seize assets from citizens through civil processes without ever having to prove they committed a crime. The site includes IJ's videos and report about "Policing for Profit," as well as details about a handful of specific cases, some of which will be familiar to regular Reason readers. And there will be more cases.

"We're going to have a whole string of them coming out in the next year," says IJ Senior Attorney Scott Bullock. He is leading the institute's eight-member "forfeiture initiative team."

The site, though, is not just about what IJ is doing to fight asset forfeitures. It highlights the two recently introduced congressional bills to try to scale back the power on the federal level to take citizens' property without real due process. It also offers some model legislation language that could be used on the state level to reform the rules and reporting requirements for asset forfeiture. The model legislation could be used, for example, for citizens to craft a ballot initiative in their states for an "end run" around government interests, Bullock said.

"When Americans hear you can lose your property without committing a crime, they can't believe it," Bullock said. "But there are powerful interest groups on the other side that fight tooth and nail to fight reform," like the prosecutors and law enforcement agencies who get the money from the forfeitures. Such efforts have succeeded in Oregon and Utah, though unfortunately Utah's reforms were gutted last year.

IJ has had a string of successes lately, fighting licensing regulations meant to hamstring everybody from coffin-crafting monks to hair-braiders to taxi drivers. May the new push produce more victories.