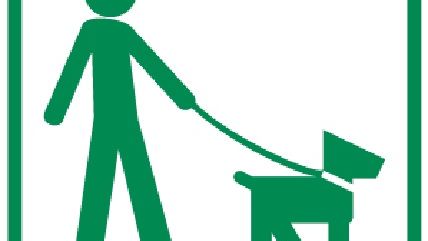 John Gladwin, a 69-year-old Army veteran, "must allow home visits by a federal probation officer, file monthly activity reports and … must get written authorization anytime he leaves the massive Central District covering most of Southern California," details LA Weekly. The government chooses to monitor this retiree and restrict his movement, though he's never committed a violent crime or sold illegal drugs or weapons. No, he let his dog, Molly, off her leash to play just beyond their yard in the vast expanse of Santa Monica Mountains.

The thing is, Molly has never actually caused trouble with hikers or others in these mountains, which are divided among four different authorities – California State Parks, Santa Monica Mountains Conservancy, Mountains Recreation and Conservation Authority and U.S. National Park Service – and each have different rules. But he's twice been caught in federal territory just hundreds of feet from his own property and has been prosecuted for violating a leash law. Now, "if he's caught with so much as a foot in the park, which stretches 50 miles from the Hollywood Hills to Point Mugu, [Gladwin] will go to jail."

Gladwin is riding out a 12-month probation for what seems like a few unfortunate encounters with officials on power trips. From the Weekly:

Supervisory Park Ranger Bonnie Clarfield, of the U.S. Department of Interior, testified against Gladwin at his November 2013 and April 2014 trials. Colleagues have teasingly dubbed her the "dog narc" — for her strict enforcement of leash laws during her 33 years on the job.

Things came to a head before Gladwin's first trial, during the government shutdown last Nobember:

Clarfield had stayed on the job that night, and spotted Gladwin and the dog. She was all set to give him a warning — until she recognized his name, by then infamous to the rangers. Clarfield issued him a citation — requiring a court appearance.

Clarfield isn't the only one that's opted to be tough on Gladwin. Assistant U.S. Attorney Sharon McCaslin, who hands most misdemeanors for the Central District, told the Weekly, "I've never had someone, while a trial was pending, go and commit the same offense. He's incorrigible. … He thinks the park is his backyard."

Gladwin has twice opted to go to trial rather than accept a plea bargain offered by the U.S. Attorney.

"[McCaslin's] job is to make sure that nobody goes to trial," Gladwin says of the prosecutor's misdemeanor caseload. "That's strike No. 1 against me, because I chose to go to trial." He believes McCaslin is using his case as a learning experience for her law student interns.

"These people need push-back. They're just wasting resources," Gladwin says. "Now it's all been about punishing me. To what end?"

Gladwin says that "the probation department doesn't even take it seriously" and that it seems like a lot of government resources going to waste to hammer him, since he's changed his route and takes Molly on walks on private land.