What You Should Take Away From Glenn Greenwald's Latest NSA Report 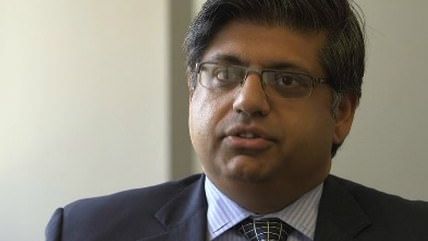 Last night Glenn Greenwald published his latest information about National Security Agency (NSA) surveillance, naming five Americans of Muslim backgrounds targeted for e-mail collection. I hesitate to call it a bombshell because I would predict most folks—whether they agree with the government's tactics—probably suspected this was exactly what they were doing.

I threw up a link really quickly last night just to draw attention to Greenwald's latest. Spending some time to really look over the information and responses, here's a few things I think that are worth taking away from the report that could end up being lost in the debate.

It's not just five American targets total. The file Greenwald is drawing this information from, email surveillance targets from 2002 to 2008, contained more than 7,000 targets. At least 200 of them were of American citizens. The five men named and interviewed by Greenwald were the ones whose names they were able to figure out from their email addresses. More than 5,000 addresses don't identify whether or not the targets are Americans (or they don't know) so the number could actually be much higher. Some, indeed, were terrorism suspects, such as Anwar al-Alwaki, killed in a drone attack in Yemen in 2011.

One of the targets was suing the federal government for previous illegal surveillance while he was being monitored again. Asim Ghafoor served as an attorney representing a Saudi charity whose assets were frozen over allegations of ties to Osama bin Laden. During the case in 2004, Ghafoor discovered his calls were being monitored:

In 2004, during the Al Haramain litigation, the Treasury Department accidentally provided one of the foundation's lawyers with a top-secret call log showing that the government had been eavesdropping on Ghafoor's calls with his clients. FBI agents quickly showed up to retrieve the document, and they took Ghafoor's laptop for a week to "scrub" it of any trace of the classified information. At the time, neither Ghafoor nor Wendell Belew, the other attorney whose conversations were monitored, knew what to make of the log. The following year, when James Risen and Eric Lichtblau of The New York Times revealed the Bush Administration's illegal wiretapping program, Ghafoor realized that his attorney-client conversations had been surveilled without a warrant.

"When I received a document that proved I had been tapped talking to my clients, I was shocked beyond belief," Ghafoor recalls. "It's like finding out there was a peeping tom. You just wonder: What else did they violate?"

The attorneys and Al Haramain sued the U.S. government, claiming that the eavesdropping violated their constitutional rights. After nearly five years of litigation, Ghafoor was awarded more than $20,000 in damages and the government was ordered to pay his legal fees of $2.5 million. Those judgments were later reversed on appeal, on the grounds that the law does not explicitly entitle those targeted by surveillance to damages from the government, even if they prove that the surveillance was illegal.

During this time while Ghafoor was suing the government for listening to his phone calls with his client, it was also secretly monitoring his e-mails.

There's a reason the story focuses on the ethnic background of the targets (beyond the obvious). Ghafoor and fellow surveillance target Faisal Gill (a former George W. Bush administration official) both have represented legal interests of foreign countries like Sudan. But so have many other Americans, extremely white Americans like Dick Gephardt and Bob Dole. Greenwald and reporter Murtaza Hussain could not find any evidence from the documents that other lawyers at other firms were having their communications monitored:

While Gill and Ghafoor both ended up being surveilled, none of the Hunton & Williams lawyers who represented Sudan appear to be listed in the NSA spreadsheet. Also missing from the list is any apparent mention of the multitude of American, non-Muslim politicians who have represented foreign governments, including former House Majority Leader Dick Gephardt (Turkey), former Senate Majority Leader Bob Dole (United Arab Emirates),  former Rep. Bob Livingston (Libya), and former Clinton adviser Lanny Davis (Honduras post-coup).

Under U.S. law, Gill's legal work for the Sudanese government could not have been used to justify targeting him for surveillance, absent any other evidence. "Representation of a foreign government in legal matters by itself does not make a U.S. lawyer an agent of a foreign power," NSA spokesperson Vanee Vines said in a statement. According to the NSA spreadsheet, Gill's surveillance was terminated in February 2008.

One of the targets, despite having a Middle Eastern background, doesn't even identify as Muslim. Hooshang Amirahmadi, who has dual citizenship as an Iranian and an American, says he's an atheist. But The Intercept notes he opposes sanctions in Iran and attempts to foment regime changes as foreign policy goals. Amirahmadi himself, though, believes he was targeted over his diplomatic connections, not his ethnicity, and declined to be interviewed for the story.

There's still more to come! Greenwald and Hussain participated in a Reddit "Ask Me Anything" thread this morning. A Reddit participant asked if there were other targeted groups beyond Muslim leaders. Greenwald responded:

I get in trouble every time I talk about our reporting before it's ready, but suffice to say: Muslims, while the prime target of post-9/11 abuses, are not the only ones targeted by them, and there is definitely more big reporting to come from the Snowden archive.

My prediction: the Occupy folks. We've already seen they were targeted for analysis and poorly managed monitoring by fusion centers.

One of the responses from unnamed government officials to the report has been that Greenwald is potentially identifying the names of people who agreed to become government informants following surveillance. But from his Reddit chat, Greenwald and Hussain indicate they contacted these five targets and got permission from them to reveal their names, even from Amirahmadi.