As unlikely as it sounds, anti-interventionists may miss the 44th president when he's gone.

Matt Welch | From the August/September 2014 issue 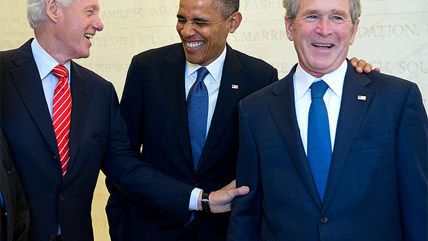 For two groups who share a strong antipathy toward the current president, libertarians and conservatives sure don't agree on much when it comes to Barack Obama.

On foreign policy, neoconservatives tend to think Obama is an appeasement-addicted driver of America's perilous withdrawal from the world, while libertarians portray him as essentially serving out the third and fourth terms of George W. Bush. When the president announced in May that U.S. troop levels in Afghanistan would be reduced to 9,800, Weekly Standard Editor William Kristol called the plan "unbelievably irresponsible" and "totally crazy," while reason's own Nick Gillespie lamented that "Obama gives 10,000 men opportunity to be last man to die for our mistake."

Depending on how you view the world, the president is alternately prostrating himself before Vladimir Putin, as in a recent National Review cover illustration, or engaging in a campaign of "subvert and overthrow," as at Antiwar.com. He is waging a "foreign policy of retreat" if you ask Washington Post columnist Charles Krauthammer, or one of "bellicose interventionism" if you're listening to the Ron Paul Institute's Daniel McAdams. He is imperiously refusing to close the Guantanamo Bay prison camp, or he is recklessly releasing Gitmo prisoners into the wild.

This interpretative disconnect does not stop at the water's edge. Obama has been a profound disappointment to civil libertarians who hate the drug war (see reason's October 2011 cover: "Bummer"), and an active encourager of marijuana culture, according to Sean Hannity's recent "Stoned in America" series on Fox News. Fiscal hawks condemn the president as a profligate promise-breaker when it comes to the national purse; New York Times columnist David Brooks counters that Obama is "the most realistic and reasonable major player in Washington," and that "if he had some support" on long-term debt reduction issues, "he'd do the right thing."

It's always a healthy exercise to check your premises and examine whether the people you disagree with may be onto something. But even if you're 100 percent secure in your assessment of the commander in chief, here's a potentially awful scenario to consider: What if Barack Obama turns out to be the most libertarian president of the post-Cold War era?

Before you go screaming for the exits, let me quickly stress that "most libertarian" within a small group of people does not equal "libertarian"—just as being the tallest kindergartner does not mean you can dunk a basketball.

Which is kind of the point: The default stance of the modern president is to be profoundly interventionist at home and abroad. Given a political world in which it's plausible that either Hillary Clinton or someone like Jeb Bush might take residence at 1600 Pennsylvania Avenue in 2017, it's sobering to reflect that Obama's record on a few key issues-or at least America's record, while Obama held office-may end up looking comparatively less interventionist than most.

Take foreign policy. Libertarian critics are right to point out that the president acted illegally in bombing Libya in 2011, was clearly ready to repeat the mistake in Syria in 2013, and surged troop levels in Afghanistan to no long-lasting effect except for the U.S. soldiers maimed or killed. In a May 28 commencement speech at West Point, the president unveiled what was billed as a "doctrine," but was more properly received as an irritating, incoherent series of rhetorical attacks against strawman isolationists and ultra-interventionists. "President Obama succeeded where all his previous efforts had failed," Patrick Buchanan cracked afterward in his syndicated column. "He brought us together. Nobody seems to have liked the speech."

But surely the message fell flat in part because American ears are unused to hearing about the messy, patriotically unsatisfying business of winding down unpopular wars.

"Since World War II, some of our most costly mistakes came not from our restraint, but from our willingness to rush into military adventures without thinking through the consequences," Obama said, accurately. "Tough talk often draws headlines, but war rarely conforms to slogans."

George H.W. Bush led the Gulf War. Bill Clinton patrolled its aftermath, initiated a series of small interventions around the globe, and used American force to cement the breakup of Yugoslavia and the eventual dethroning of Slobodan Milosevic. George W. Bush made the fateful decision to invade Iraq, to nation-build in both Baghdad and Kabul, and to launch a vague war on terror that will not end until Congress repeals the September 14, 2001, Authorization for the Use of Military Force.

Obama, by comparison, helped wind down the two occupations he inherited, pricked Libya exclusively with bombs, and bowed down when public opinion came out heavily against his plans to bomb Syria. Yes, he expanded his predecessor's dirty wars and took the unprecedented step of droning Americans to death without due process, but he still might come out looking like the least interventionist of the bunch.

This is especially true when you consider the 2016 election. Hillary Clinton is the most hawkish Democrat since Joe Lieberman left the party, and she rues the day the president blinked on Syria. Of the putative Republican establishment hopefuls, Sen. Marco Rubio (R-Fla.) is a chest-thumper who complains that Obama "doesn't seem to understand that we are still at war," New Jersey Gov. Chris Christie is campaigning against what he calls a "dangerous strain of libertarianism," and Jeb Bush is warning people about "American passivity" and GOP "neo-isolationism." The only exception to business-as-usual Republican bellicosity is coming from Sen. Rand Paul (Ky.); if he doesn't win the nomination, the GOP is almost sure to elect someone more hawkish than Obama.

What about domestic civil liberties? Yes, Obama's Justice Department raided more medical marijuana dispensaries than Bush's ever dreamed of, while the president himself literally laughed out loud at the prospect of legalization for recreational use. Yet the beginning of the drug war's end is happening on his watch, thanks in part to his sporadically benign neglect. The federal government could have launched a foolhardy new crackdown after Colorado and Washington state legalized pot, but did not. Attorney General Eric Holder has at least begun talking about the need for legal pot businesses to be able to access the normal banking system without constant fear of federal sanction. And after an extremely slow start using his clemency powers, the president has issued criteria for jailed nonviolent drug offenders to be eligible. More than 18,000 prisoners have applied, but the Republican-led House of Representatives passed an amendment in May preventing the use of federal funds for screening applications.

Again, the president's most likely successors not named Rand Paul are virtually certain to be worse. Hillary Clinton has said that the U.S. can't legalize drugs "because there is just too much money in it," and spent her time as secretary of state warning Latin American countries that the best approach to their drug policy problems is more state violence. Chris Christie is one of the bigger opponents of medical marijuana in the country. Marco Rubio said in a May interview, "I don't think there is a responsible way to recreationally use marijuana." And Jeb Bush was an ardent drug warrior as Florida governor.

Even federal spending may end up going up less overall under Obama than under his predecessor, though it should be stressed that a) George W. Bush's spending record was truly awful, b) much of "Obama's" post-2009 spending restraint originated with opposition Republicans, and c) he is leaving some future massive balloon payments in the forms of Obamacare and money-sucking entitlement systems that he failed to tackle.

In many important ways-especially on Obamacare, domestic surveillance, and Keynesian economics-Barack Obama will rightly go down as a solidly anti-libertarian president. It's a pathetic statement about contemporary American politics that a few short years from now, libertarians may start to feel nostalgic for the guy.